Why people stick by scandal-plagued pastors 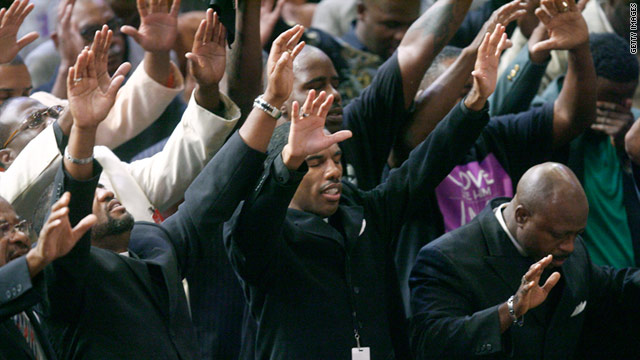 Parishioners often build a firewall around a pastor hit by scandal, a Christian author says. But when does loyalty turn unhealthy?
STORY HIGHLIGHTS

(CNN) -- The streets that were once choked with traffic are now bare. The church's sprawling parking lot is half full. Inside the stylish sanctuary, ushers sway to choir music in front of empty seats.

On a typical Sunday morning, New Birth Missionary Church in suburban Atlanta would be hopping. But on a recent Sunday, the sprawling church complex looked half-deserted and the mood seemed flat.

Six months after a sex scandal involving New Birth's senior pastor, Bishop Eddie Long, became public, the megachurch no longer packs them in. Yet there are loyalists, like C.D. Dixon, who have not joined the exodus.

"I come back to the church even more now because the word is more powerful," she said as she stood with a serene smile in the parking lot before a recent service.

Last fall, four young men accused Long of using his spiritual authority to pressure them into sexual relationships, charges that Long has vehemently denied. On Thursday, lawyers for the four men released a statement saying only that "the matter has been resolved."

For Dixon, though, the allegations only make Long's sermons more powerful.

"The cry from the bishop's belly is more now. We're not dealing with right or wrong. We're dealing with God's deliverance. I don't know if that makes sense to you."

For some, it doesn't. While most church scandals revolve around the conduct of a pastor, there's another question lurking behind the headlines that onlookers often ask: Why do some people stick by their pastor even when everyone else in the church seems to be leaving?

Some do it because they've placed a "spiritual firewall" around their pastor, and in their own mind, said Sue Thompson, a professional speaker who attended a church that disintegrated after a pastor's extramarital affair was exposed.

We were on the front page for all of the wrong reasons.
--Janet Shan, on megachurch destroyed by pastor scandals.

She said some parishioners cannot leave a pastor because they credit him or her with a life-changing event, such as inspiring them to overcome drug addiction or turning around a disastrous marriage.

To accept such a pastor's guilt, she said, would lead them to contemplate another possibility: Is my life-changing event just as fraudulent as the pastor who inspired it?

"There is a suspension of common sense, a refusal to put two and two together," Thompson said. "For a lot of people, this is the man who gave them the keys to a whole new way of living. They can't separate the good they received from the man himself, so they feel it would be a betrayal to turn on him now."

When outsiders ratchet up criticism against an embattled pastor, members often go into battle mode, said Thompson, author of "The Prodigal Brother: Making Peace with Your Parents, Your Past, and the Wayward One in Your Family."

"They circle the wagons to protect their guy," Thompson said. "They don't want to see, and they don't want to be made to see what 'the world' sees. They believe the world's view is false, so they form the firewall."

Conditioned by the language of persecution

Some parishioners can't let go because of their reading of the Bible, a religion scholar said.

The Bible is full of persecution stories: The Egyptian oppression of the Israelites, the persecution of Jesus. Some pastors who are frequent targets for criticism condition their followers to stick by them no matter what by invoking these stories, said Jonathan Walton, an assistant professor of religion at Harvard Divinity School in Massachusetts. 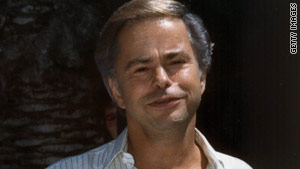 Parishioners rallied around televangelist Jim Bakker for years before a scandal destroyed the pastor's ministry.

"Many of these churches are conditioned to be under scrutiny," Walton said. "They view themselves as saints living in exile in the world. Nobody at the end of the day wants to be labeled Judas or, God forbid, Peter, the one who denied the faith at the moment of persecution."

The persecution mentality can take on another dimension when race is added to the mix, said Marla Frederick, author of "Between Sundays: Black Women and Everyday Struggles of Faith."

African-American history is filled with examples of charismatic black religious figures -- the Rev. Martin Luther King Jr.; Malcolm X; Elijah Muhammad, founder of the Nation of Islam -- who were targeted by shadowy political forces trying to discredit them, Frederick said.

"At the time, it was seen as a white racist society trying to dismantle a strong black organization," Frederick said. "They didn't like to see black men being successful. People felt like there were larger political forces at work."

Sometimes, people stick by an embattled pastor for voyeuristic reasons -- they like watching "train wrecks," said one sociologist who has studied megachurches.

Shayne Lee, a sociologist and co-author of "Holy Mavericks: Evangelical Innovators and the Spiritual Marketplace," said some parishioners see scandal as a spiritual spectacle. They view themselves as participants in a cosmic struggle.

"When you have a spiritual world view that emphasizes the power of the Holy Spirit and you see all these dynamic tensions in church, it's exciting to see the forces of evil and the power of God at work," Lee said. "There's a certain dynamism that's attractive and keeps people coming back."

And then some parishioners won't let preacher scandals drive them away because they say that the message they receive is more important than the vessel that delivers it.

Thomas Kirkpatrick cited that rationale as he walked to New Birth for Sunday service. He shrugged at the allegations surrounding Long.

Long publicly denied the sexual coercion claims, and compared himself to David fighting Goliath. The scandal's impact on New Birth, though, may already be apparent. Attendance has dropped, staff is being laid off and Long recently announced that he would take a salary cut.

A New Birth spokesman attributed the changes to a sour economy and said the declining attendance is the result of more people watching the church service online.

None of this appeared to matter to Kirkpatrick. He said Long would have to answer to God, not him.

"I don't think Bishop Long can do anything worse than what Judas did, and God still loved him," Kirkpatrick said.

"There are people who we trust with our lives every day, like doctors, who do all sorts of things, but we don't question them. This is our spiritual medicine. We come here to get what we need and then we leave."

When asked if there was anything that would cause him to stop attending New Birth, Kirkpatrick lowered his head and paused before he finally said:

"The church would have to close."

Breaking through the firewall

They believe the world's view is false so they form a firewall.
-- Susan Thompson, Christian author, on parishioners who stick by scandal-plagued pastors no matter what
RELATED TOPICS

Janet Shan said she couldn't wait that long at her former church. She wrote an online essay about the emotional whiplash she experienced when her church became engulfed in scandal.

Shan was a regular attendee at Chapel Hill Harvester Church, an Atlanta megachurch whose pastor was caught in a sex scandal that involved several women. The church was eventually forced to sell its massive cathedral and close.

"He blamed it all on Satan," said Shan, a freelance writer and editor of an online magazine, The Hinterland Gazette.

Shan said she didn't initially believe the accusations because she thought the women had ulterior motives. But as more accusations surfaced, she became suspicious.

So did many in the congregation. She said the church pews started emptying "faster than someone yelling fire." Those remaining began arguing among themselves. Church leaders vanished from the pulpit without explanation, she said.

"People were devastated," Shan said. "There was a feeling of defeat in the atmosphere. We were on the front page for all of the wrong reasons."

The allegations over Paulk's sexual indiscretions made headlines for over a decade. One accuser said Paulk molested her when she was a child. That allegation ended in a civil suit that was settled out of court.

During a deposition in another suit filed by a woman, Paulk said under oath that he had slept with only one woman outside of marriage. A court-ordered paternity test then revealed that he had also fathered a child with his brother's wife.

Paulk eventually pleaded guilty to lying under oath, and was fined $1,000 and placed on probation for 10 years. He died in 2009 at 81 from cancer.

Shan left Paulk's church, but like others who had abandoned churches rocked by scandal, it took time to recover.

"I didn't go to church for a year or two," she said. "I've lowered my expectations for pastors."

Trying to persuade a parishioner to leave is difficult, though, said Thompson, the professional speaker who left her own embattled church.

"It cannot be done by simply showing the person who still believes in the charlatan 'the truth' about him," she said. "It can't be done by ridiculing and dismissing the person's faith in the man. It is done by sincere biblical discussions, talking about the red flags that everyone saw but many were ignoring."

Thompson said church members must ultimately learn two lessons: The message must be disconnected from the messenger, and "psychopaths and narcissists live in the church world, too."

Then again, that still might not be enough, she said.

"For a lot of people, it will take catching the guy in the act -- he runs off with church money, he goes to jail, he's caught on film with a prostitute," she said. "And even then, some are so fundamentally misinformed about concepts of forgiveness and judgment that they blindly go on supporting him."