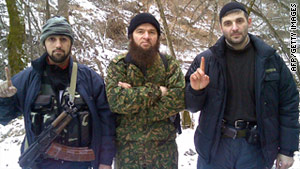 Washington (CNN) -- The United States has added Caucasus Emirate, a Chechen group based in North Caucasus, to its list of terrorist groups, and authorized an award of up to $5 million for information leading to the location of its leader, the State Department announced Thursday.

The designation was made under the authority of a presidential executive order that targets groups and individuals that provide support to terrorists, terrorist organizations or acts of terrorism.

In a news release, the State Department said investigators had identified the group's leader, Doku Umarov, as having organized a suicide bombing outside the Chechen Interior Ministry in May 2009. The group also claimed responsibility for the bombing of the Domodedovo airport in Moscow earlier this year that killed 36 people, last year's bombings of the Moscow subway that killed 40, and the bombing of the high-speed Nevsky Express train in 2009 in which 28 people died.

Umarov, 47, was born in Kharsenoi, Chechnya, in the former Soviet Union. He has issued several statements in the past encouraging his followers to commit acts of violence against his group's enemies, which include the United States, Israel and the United Kingdom in addition to Russia.

"The designation of Caucasus Emirate is in response to the threats posed to the United States and Russia," Ambassador Daniel Benjamin, the Department of State's coordinator for counterterrorism, said in the news release. "The attacks perpetrated by Caucasus Emirate illustrate the global nature of the terrorist problem we face today. We stand in solidarity with the Russian people in our condemnation of these deplorable terrorist acts."

The State Department said designating Caucasus Emirate as a terrorist group will help support U.S. efforts to reduce the group's ability to mount attacks on Russian interests as it tries to expel the Russian government from the North Caucasus region.

The announcement, a culmination of a months-long deliberative interagency process, came the same day President Barack Obama met with Russian President Dmitry Medvedev on the sidelines of the G8 summit in Deauville, France.