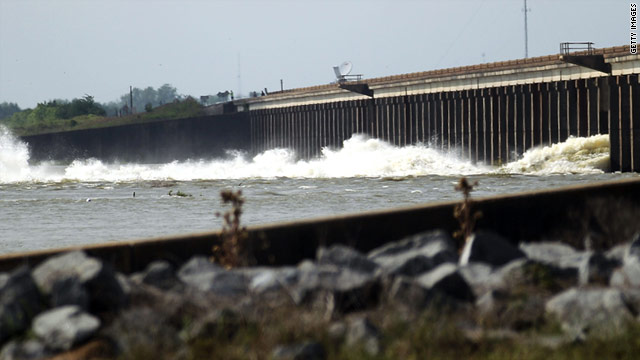 The Army Corps of Engineers announced Wednesday that it already had closed three of the 17 open bays at the Morganza Spillway, which was opened May 14 to prevent the Mississippi from flooding New Orleans and Baton Rouge. The Corps said much as 1.2 million gallons (172,000 cubic feet) per second had been pouring through the spillway, which diverted water through the Atchafalaya River basin to the Gulf of Mexico west of New Orleans.

The resulting high water has caused some flooding down the Atchafalaya. But the water levels "continue to be lower than anticipated" throughout the basin, Corps spokesman Ken Holder said in a statement announcing the decision.

The river remained about four feet above flood stage Wednesday night at Bayou Sorrel and about 7 feet over flood stage at Morgan City, on the approaches to the Gulf. But it was more than five feet lower at the town of Krotz Springs and about two feet below flood stage at Butte LaRose, about 20 miles south of the spillway.

Rising water levels forced Louisiana authorities to halt boat traffic down a four-mile stretch of the Atchafalaya around the town of Butte LaRose starting Thursday, since the surface of the river had climbed to within seven feet of high-voltage power lines, the Louisiana Department of Wildlife and Fisheries announced.

The 125-bay Morganza Spillway was last opened during a 1973 flood.