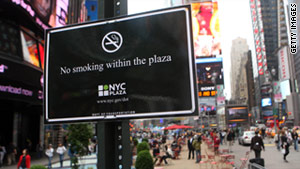 A no smoking sign is posted in the pedestrian plaza in Times Square.
STORY HIGHLIGHTS
RELATED TOPICS

New York (CNN) -- Smokers in New York City looking to light up in most public places will not be able to without paying a price after an outdoor citywide smoking ban takes effect Monday.

The law, which Mayor Michael Bloomberg signed in February after it was passed by the New York City Council, will make smoking illegal in New York City's 1,700 parks and on the city's 14 miles of public beaches. Smoking will also be prohibited in pedestrian plazas like Times Square.

The ban is designed to help curb exposure to secondhand smoke as well as reduce litter.

Secondhand smoke causes close to 50,000 deaths per year, and side effects may include lung cancer, respiratory infections and asthma, according to the American Lung Association's website. Cigarette butts account for 75% of the litter found on New York City beaches, according to a news release from Bloomberg's office.

"Smoking in parks and beaches not only harms people trying to enjoy these recreational facilities, it also causes a litter problem that harms the beauty of our parks," Bloomberg said before he signed the bill into law.

New York City follows in the footsteps of 105 municipalities (in states including California, Hawaii, Massachusetts and New Jersey) that have banned smoking on public beaches, according to data from the advocacy group Americans for Nonsmokers' Rights. Major cities include Los Angeles, Minneapolis and Seattle.

Puerto Rico prohibits smoking in all parks and beaches.

"These smoke-free laws start at a local level," said Cynthia Hallett, executive director of Americans for Nonsmokers' Rights. "They are based on community demand, science looking at exposure to secondhand smoke and the environmental impact."

Thirty-five states have laws in effect that require 100% smoke-free nonhospitality workplaces, restaurants or bars, according to the American Nonsmokers' Rights Foundation's "Summary of 100% Smokefree State Laws and Population Protected by 100% U.S. Smokefree Laws" compiled in April 2011.

In all, 79.4% of the country's population is covered by local and state laws banning smoking.

Hallett added that the trend to ban smoking is working from the inside out, starting in the indoor workplace, moving to restaurants with patios and then eventually to the great outdoors.

Not all New Yorkers are embracing the ban. New York City C.L.A.S.H. (Citizens Lobbying Against Smoker Harassment), a grassroots organization, is staging a "smoke in the park" at a city beach to demonstrate "that this law will be paid the respect it deserves," according to its website

The ban will be enforced by the city's parks department, and if violators are caught, they could be fined $50.

New York City passed its first Smoke Free Air Act in 1988, when smoking was banned in public restrooms and taxicabs. Since then, the law has been amended three times, most notably in 2002, when smoking in some indoor areas -- including restaurants and bars -- was banned.