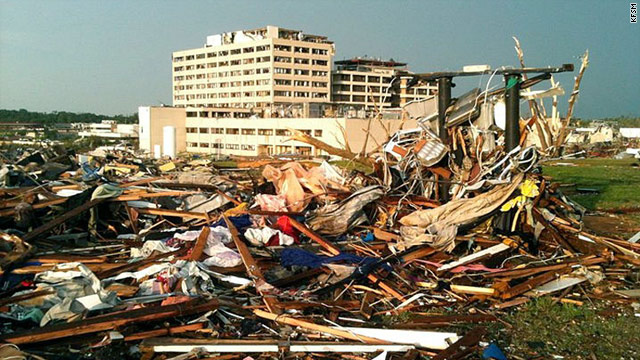 Read more tornado coverage from CNN affilites KFSM and KODE. Were you affected? Share your story.

But the evening wound up as anything but typical, as the nine-story building took what officials said was a direct hit from a tornado. The twister turned a place where the injured typically would seek treatment and refuge into a scene of chaos and devastation.

Windows were blown out, gurneys tossed up to five blocks away, and 183 patients and about 200 staffers were evacuated. X-rays from St. John's reportedly were found in driveways in Dade County, Missouri, about 70 miles away.

View from above: Tornado damage

The building in southwest Joplin stood empty Monday morning, looking as if it had been bombed. Mangled cars had been tossed about the parking lot and strewn in front of the emergency room entrance. The hospital's medical helicopter lay some distance away from its landing pad, heavily damaged.

A statue of a cross out front appeared to be the only thing left undamaged. However, the hospital was very nearly the only building left standing, as the nearby area was flattened by the twister.

CNN iReporter Zach Tusinger, 26, a Joplin attorney, said his aunt and uncle, who lived five blocks from the hospital, were killed.

"My aunt was a pretty avid Facebooker, and she posted about the time I was taking the picture," he said of his iReport. "She posted, 'Oh my God' on Facebook. It's crazy because those are her last words."

Hospital officials swung into action almost immediately after the tornado struck, attempting to get patients to safety and setting up triage centers in tents outside.

The most critical patients were taken to Freeman Health System hospital, about two miles east. Patients who were able to walk were taken to Memorial Hall, a community building in Joplin, where a makeshift facility was set up. Still others were taken to a Catholic high school, at least temporarily, said Miranda Lewis, a spokeswoman for St. John's.

And more were taken to other Mercy Health System hospitals in the region, company CEO and President Lynn Britton said.

St. John's Hospital in Springfield, Missouri, about 70 miles east of Joplin, had received 58 people as of about 10 a.m. CT Monday, spokeswoman Lisa Cox said. Of those, 17 were patients from St. John's in Joplin, she said, and the others had storm-related injuries. "They're still coming," she said.

Efforts to contact Freeman Health System hospital were unsuccessful, as calls to Joplin elicited only a busy signal Monday.

There was no information on whether anyone was injured or killed when the tornado struck the hospital.

Lewis said she was at home across town when the twister struck, and before cell service was lost, "I started getting text messages almost immediately that the hospital had been hit," she told CNN affiliate KODE.

She praised the efforts of those at the hospital to get patients out. Joplin Fire Chief Mitch Randles told reporters the evacuation only took about an hour and a half.

Lewis said she didn't see any fires on the scene when she arrived, but knew that natural gas leaks were present.

Although the tornado sirens sounded, she said, "from what I've heard there was very little warning here," she said, but "obviously, a tornado this big, it's difficult to prepare for something of this magnitude."

Sara Ferguson was near the hospital when the storm hit. "The houses are all gone," she told The Joplin Globe newspaper. "The medical buildings are gone. (The hospital) windows have all been blown out. It was horrible. I couldn't even take pictures on my phone. I was crying."

Structural engineers were en route to Joplin to evaluate the hospital, Britton said.