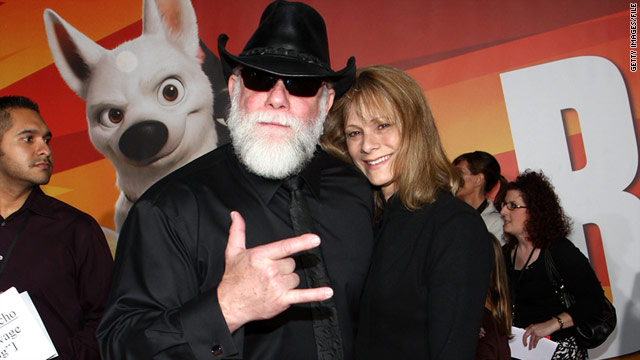 "Macho Man" Randy Savage and his wife, Barbara, attend the premiere of the animated film "Bolt" in 2008.
STORY HIGHLIGHTS

(CNN) -- Retired pro wrestler "Macho Man" Randy Savage, 58, was killed Friday morning in Seminole, Florida, when the Jeep he was driving jumped a median and hit a tree, the Florida Highway Patrol said.

His wife, Barbara L. Poffo, 56, who was in the passenger seat, was injured, the patrol said. She was expected to be released from a hospital, said Highway Patrol Sgt. 1st Class Steve Gaskins.

Savage's real name was Randall Mario Poffo, according to the wrestling federation for which he performed. The couple lived in Seminole, authorities said.

An investigation is under way, but a Highway Patrol report said that Randall Poffo "lost control" of his 2009 Jeep Wrangler for "unknown reasons" as it was traveling westbound on Florida State Route 694 near 113th Street North in Pinellas County.

A Highway Patrol report said Poffo "may have suffered a medical event; however, this cannot be confirmed until an autopsy is performed."

His vehicle "traveled over the raised concrete median divider, crossed the eastbound lanes of SR-694, over the outside curb and collided head-on with a tree," the report said.

As a pro wrestler, he was known for his catchphrases "Ooooooh Yeaahhhhh!" and "Can you dig it?"

After he retired from wrestling, he became known for his Slim Jim commercials.

The wrestling federation and the maker of Slim Jim meat sticks expressed sympathies.

"WWE is saddened to learn of the passing of one of the greatest superstars of his time, Randy Poffo, aka Randy 'Macho Man' Savage," the wrestling federation said in a statement. "Poffo was under contract with WWE from 1985 to 1993 and held both the WWE and Intercontinental championships. Our sincerest condolences go out to his family and friends. We wish a speedy recovery to his wife, Lynn. Poffo will be greatly missed by WWE and his fans."

"We're saddened by the loss," ConAgra Foods, which makes Slim Jims, said in a statement. "Randy was a beloved ambassador for the Slim Jim brand for many years and will be greatly missed."