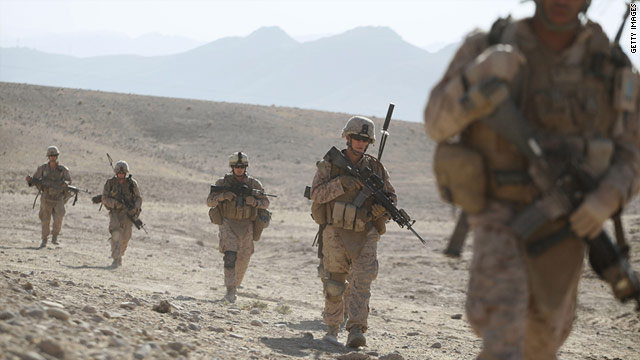 U.S. Marines patrol the outskirts of a village near a forward operating base near Kajaki, Afghanistan, in October.
STORY HIGHLIGHTS
RELATED TOPICS

Washington (CNN) -- A new report paints a stark picture of the toll on the U.S. military of almost a decade of war: higher stress and lower morale.

The report, released Thursday at the Pentagon, relied on questions to soldiers and Marines in Afghanistan in July and August of last year and compared responses with similar surveys in 2005 and 2009.

The report noted "significant decline in reports of individual morale" as well as "acute stress rates significantly higher" than in earlier years.

"Psychologically, it is hard to imagine that these elevated levels of combat are not taking a toll on soldiers. Reports of acute stress symptoms among soldiers surveyed in 2010 have significantly increased and reports of individual morale have significantly decreased relative to 2009," said the report, formally known as the Joint Mental Health Advisory Team 7.

Senior military officers regularly warn that there is a cumulative cost of multiple tours in Iraq and Afghanistan.

"Soldiers on their third/fourth deployment report significantly more psychological problems and use of mental health medications than soldiers on their first or second deployment," the report said in the summary of findings for the Army.

But there also are multiple positive findings, including increased "resilience" and "low levels of psychological problems under conditions of high combat and significantly higher unit cohesion and readiness."

Also, military personnel reported greater access to mental health services, as the military increased the numbers of caregivers and lowered the stigma associated with seeking help.

For Marines, the report said the rate of reporting psychological problems such as acute stress, depression or anxiety is significantly higher in 2010, with a "dramatic increase" in combat exposure.

Another theme of the report is how common it is for soldiers and Marines to be exposed to explosions, for instance from roadside bombs.

"Over 50% of the soldiers reported being dismounted and within 50 meters of a blast at least once," the report said. "This number is almost certainly an underestimate of the percent of soldiers that will experience exposure to blast in a full 12-month tour."