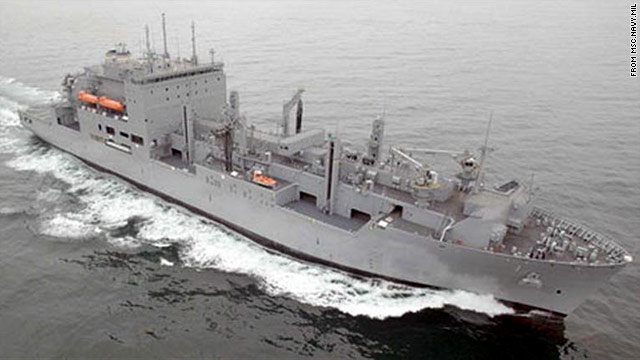 The decision was an ideal fit for the latest in the Lewis and Clark class of ships, which bear the names of legendary pioneers and explorers, Secretary of the Navy Ray Mabus said in a statement.

"Cesar Chavez inspired young Americans to do what is right and what is necessary to protect our freedoms and our country," he said. "The Cesar Chavez will sail hundreds of thousands of miles and will bring support and assistance to thousands upon thousands of people. His example will live on in this great ship."

In 1962, Chavez founded the National Farm Workers Association, which grew into the United Farm Workers.

He has been widely honored for turning the spotlight on the plight of farm workers, helping bring them better pay and safer working conditions. Chavez died in 1993. Former President Bill Clinton posthumously presented Chavez with the Medal of Freedom a year later.

Chavez was a Navy veteran and apparently had mixed feelings about the experience.

"In 1944 he joined the Navy at the age of 17," his official biography on the United Farm Workers website says. "He served two years and in addition to discrimination, he experienced strict regimentation."

Workers at a shipyard in San Diego are building the 689-foot ship, which can carry up to two helicopters and will be used to transport ammunition, food, fuel, repair parts and other items.

Other ships in the Navy's T-AKE class of dry cargo and ammunition ships are named for innovators like aviation pioneer Amelia Earhart and Antarctic explorer Richard Byrd.

But at least one lawmaker released a statement criticizing the Navy's decision to add Chavez to the roster.

"This decision shows the direction the Navy is heading," said Rep. Duncan Hunter, a California Republican who sits on the House Armed Services Committee. "Naming a ship after Cesar Chavez goes right along with other recent decisions by the Navy that appear to be more about making a political statement than upholding the Navy's history and tradition."

Hunter sent a letter to Mabus on Wednesday, requesting the Navy name its next available vessel after Marine Corps Sgt. Rafael Peralta, who the congressman said "showed an even greater pioneering spirit when he led a team of Marines into a house in Fallujah, Iraq."

As several family members of Chavez and Navy officials honored the ship at a ceremony in San Diego Wednesday afternoon, several Latinos in California said they were happy to hear the news.

"He was a man who fought ... for the welfare of all American workers. It will be an enormous recognition, and not to do so would say a lot," Felix Rodriguez said.

"I think the people who don't want it, maybe it's because they have never suffered ... or never have fought as he did, and I think it's very good to honor him. I feel very proud to be Latina like him," she said.