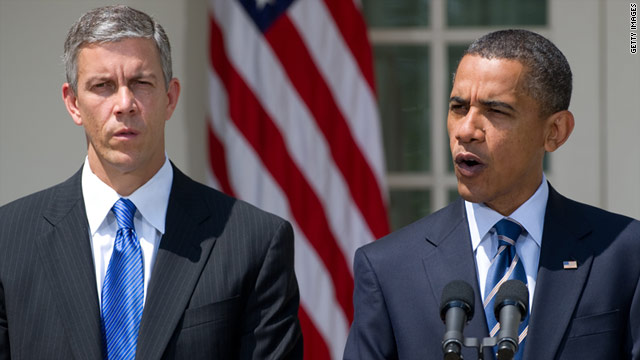 (CNN) -- An open letter of appreciation to teachers from the Obama administration's chief education official has highlighted the administration's difficult relationship with the nation's teachers.

"I have a deep and genuine appreciation for the work you do. ... You deserve to be respected, valued, and supported. ... It is my goal to see that you are treated with the dignity we award to other professionals in society," reads the letter from U.S. Secretary of Education Arne Duncan.

But many teachers are unmoved.

"Respect? Value? Support? Not seeing much," said teacher and education commentator Sabrina Stevens Shupe, who writes about education on her blog, the Failing Schools Project.

"The gap between his words and his actions is too large to ignore," Stevens Shupe said in a widely circulated open letter responding to Duncan that echoes the sentiments of many in the teaching community.

Though Duncan's letter acknowledges that teachers are often "blamed for educational failures that have roots in broken families, unsafe communities, misguided reforms, and underfunded schools systems," Stevens Shupe points out that Duncan effectively did just that last year by applauding the firing of every teacher at a school in a troubled Rhode Island school district as a way to "do what's best for kids."

In fact, Stevens Shupe said, Duncan has written off the input of teachers he claims to value by framing any criticism of his policies as "a defense of an indefensible status quo," a phrase Duncan has used in reference to his critics in the teaching community.

"How is it respectful to write off the informed opinions of concerned people who have spent their lives serving students and communities?"

Though U.S. Education Department press secretary Justin Hamilton told CNN that he doesn't think the response accurately represents the sentiments of the broader teaching community, a count of comments regarding the letter on the Education Department's own website and elsewhere found a majority of negative comments, many from those who identified themselves as teachers.

Much of the online response has centered on issues like alternative teacher training programs, charter schools and, perhaps most divisive, standardized test-based evaluations of teachers.

Duncan's letter attempts to assuage teacher concerns about standardized test-based assessments, acknowledging the need for "real feedback in a professional setting rather than drive-by visits from principals or a single score on a bubble test."

But, said Pallas, professor of sociology and education at Columbia University Teachers College, the letter's rhetoric "runs headlong into funding programs such as Race to the Top," which lead directly to teacher evaluation systems that rely heavily on standardized tests.

The Obama administration's Race to the Top program distributes money to states that compete for it based on a set of criteria, including a requirement linking test scores to teacher evaluations.

"These policies, and the dollars behind them, are clear signals of what the Department and the secretary truly value," Pallas said.

Hamilton from the Education Department acknowledged the stress on testing but said, "We think you should be able to use data in a smart way. Race to the Top did encourage states to link teacher performance to student outcomes, and that allows us to spotlight success and to know where the challenges are so that we can help with support and professional development."

But it's not about testing or about the letter or about any other single issue, said Mike Rose, professor of education at the University of California, Los Angeles.

The response from teachers is an expression of a broader frustration at not being part of the conversation about education reform, Rose said.

Though teachers are as interested as any group in reforming education, Rose said, they feel like current reforms "are being done to them, not with them."

"They feel they are being dictated to from on high by people who have never spent a day teaching in a public school classroom."

It started in the Bush administration with No Child Left Behind, which effectively blamed teachers for low-performing schools and students, without adequately addressing surrounding issues like poverty, resources and administration, he said.

But teachers really thought that with Obama, they were going to get something different, "and I think teachers are disappointed that Obama has not lived up to some of the education policy initiatives that featured prominently in his campaign."

This matters to all of us, Rose said, because if teachers and policymakers cannot find a way to communicate effectively, it will be our schools and students who suffer.

Still, some see the letter as a beginning.

Even Stevens Shupe said she was pleased, even a little excited, to see some acknowledgement of teacher concerns from Duncan.

"There may be a disconnect between the policies the administration is pursuing and the principles Duncan is advocating in his letter, but at least he is expressing admiration for a profession that has taken a lot of abuse lately."