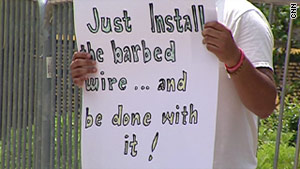 Protesters set up outside the governor's office and there were threats of boycotts against the state.
STORY HIGHLIGHTS
RELATED TOPICS

Atlanta (CNN) -- Despite protests outside his office and boycott threats, Georgia's governor signed into law Friday one of the toughest anti-illegal immigration measures enacted by an individual state.

The measure, which Gov. Nathan Deal inked about a month after it cleared the Republican-dominated Georgia Legislature, allows law enforcement officers to ask about immigration status when questioning suspects in certain criminal investigations.

HB 87 also imposes prison sentences of up to one year and fines of up to $1,000 for people who knowingly transport illegal immigrants during the commission of a crime. It also asserts that workers convicted of using fake identification to get jobs could be sentenced to 15 years in prison and fined $250,000.

"This legislation is a responsible step forward in the absence of federal action," Deal said after the bill signing. "Illegal immigration places an incredible burden on Georgia taxpayers."

As they have throughout the debate, leaders in the local Latino community railed against the measure. Among them were several dozen people who demonstrated Friday outside the governor's office at the state Capitol, chanting, "Shame on you."

The legislation drew threats of lawsuits targeting the bill, as well as boycotts aimed at forcing the government's hand. The group Southerners on New Ground is calling for a national boycott of conventions and vacation travel to Georgia, while a blog entry on the website of the group Somos Georgia warned, "Veto HB 87 or Boycott! It's your choice, Governor Deal!!"

"This is the beginning of a road that we'll travel that will take a long time," Teodoro Maus, president of the Georgia Latino Alliance for Human Rights, said Friday in Atlanta.

Similar efforts have been pursued -- with some success -- targeting other states that have passed legislation aimed at cracking down on illegal immigration. Nonetheless, anti-illegal immigrant bills can still be found from coast to coast.

The National Conference of State Legislatures found that, in 2010 alone, more than 1,400 bills were introduced aiming to give individual states more of a role in immigration enforcement. Of those measures, 208 laws were enacted, 10 were vetoed, and 138 resolutions were adopted.

The best-known such effort was in Arizona. Among other things, that legislation would have required local law enforcement officers in Arizona to apprehend and help deport illegal immigrants.

The U.S. Justice Department sued, arguing that only the federal government has that authority. Last month, a three-judge panel on the 9th U.S. Circuit Court of Appeals sided with the Justice Department and against Gov. Jan Brewer, who signed SB 1070 into law last year. Brewer has asked the Supreme Court to lift the court order that is blocking enforcement of parts of the law.

Wade Henderson, the head of the advocacy group Leadership Conference on Civil and Human Rights, blasted what he called Georgia's "odious piece of legislation." He said it was a "copycat" of the Arizona law and effectively legalizes "racial profiling."

"Georgia's lawmakers have not learned from Arizona's mistakes," Henderson said Friday in a statement. "These laws presume everyone is guilty, contradicting the fundamental American presumption that those accused are innocent until proven otherwise."

The Mexican government added Friday that it "regrets" Deal's decision to sign the law.

"The legislators and state executive ignored the many contributions of the immigrant community to the economy and society of Georgia," the Mexican government said in a statement.

But some who support the Georgia legislation -- including Deal and Phil Kent, a spokesman for the conservative group Americans for Immigration Control -- said it is not about discrimination but rather about protecting taxpayers.

"The illegal immigrants in our state have been swamping our hospitals and schools," Kent said. "It's a very expensive proposition. We just want to make sure that people are welcome here and that they come here legally. And then we can cut back on the illegal immigration."

President Barack Obama's administration has opposed such state-specific measures, including fighting them in court, saying that having as many as 50 different immigration policies (one for each state) would be counterproductive from a law enforcement standpoint and damaging from an international relations standpoint.

"The truth on the matter is we've done more on enforcement than any previous administration," the president said. "We have more border patrols; we have had serious crackdowns on employers who are hiring undocumented workers."