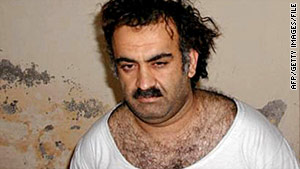 Washington (CNN) -- In the latest WikiLeaks dump of classified government documents, hundreds of risk-assessment files on Guantanamo Bay detainees tell a "he said, he said" story of terror plots considered and potentially planned as a follow-up to the 9/11 attacks.

Khalid Sheikh Mohammed, who calls himself the mastermind of the attacks in which planes crashed into the World Trade Center and the Pentagon, seemed to be busy conjuring up many plots before his capture, according to the documents. Telling interrogators that al Qaeda had planned to create a "nuclear hell storm," Mohammed gave up a chilling laundry list of attacks in the works.

Immediately after 9/11, he said, he began to plot an attack on Heathrow Airport in London. According to the documents, he told interrogators there were two primary cells for the attack, one based in the United Kingdom tasked with obtaining pilot training from a commercial flight school in Kenya, and another in Saudi Arabia, assigned to identify people willing to martyr themselves in the attack.

In late 2001, Mohammed was hatching a plan to hijack a commercial airplane and have it flown into the "tallest building in California," according to the documents, most of which were released by WikiLeaks on April 24. He planned using at least two shoe bombs to gain access to the cockpit, the documents say.

Then in April 2002, the documents say, Mohammed thought about hijacking cargo planes and simultaneously flying them into several airport terminals across the United States. He asked al Qaeda operative Iyman Faris for help, telling him to study ways of entering cargo areas of airports.

Faris also was crucial to Mohammed's plan to destroy the Brooklyn Bridge by cutting the suspension cables, according to the documents.

The video game Sega also played a role in Mohammed's plans. The documents say he discussed the use of Sega game cartridges as remote-controlled firing devices. The devices were found during a raid on Karachi in September 2002, according to the documents.

The CIA and FBI headquarters, nuclear power plants in the United States, and the tallest buildings in Washington state also made Mohammed's potential target list.

"It was never exact. That's not how intelligence information is delivered. Sometimes there's contradictions, sometimes it's confusing. But there was information indicating that there was a plot against a bridge in the Godzilla movie," Kelly said.

The New York Police Department took that reference to mean the Brooklyn Bridge and devoted additional resources to securing the span, including assigning police officers and police cars to the entrances. Kelly said the department also assigned a police boat to observe the bridge from the water and sent helicopters to do flyovers.

Al Qaeda abandoned the plan, calling the weather "too hot," meaning there was too much security on the bridge for the plan to go forward. But Kelly said the plan to cut the cables, using special blowtorches, could have been implemented if an attacker had gotten into a security room where the cables are anchored.

Gates: SEALs concerned for their safety

Mohammed wasn't the only busy plotter, apparently. The risk assessment documents released by WikiLeaks highlight many other detainee schemes.

"I'm glad that the American people are starting to learn how many of these we had to deal with and how many we were facing. I think it's a good thing," CNN National Security Contributor Fran Townsend said. She was homeland security adviser to President George W. Bush.

In early 2002, according to the documents, detainee Abu Zubaydah worked with Mohammed to send Binyam Ahmed Muhammad and Jose Padilla to Chicago, where the two were to create a natural gas explosion. Muhammad and Padilla, both of whom were apprehended, planned to rent two apartments in high-rise buildings that used natural gas for cooking and heating, and then create an explosion that would bring the buildings down.

Documents also show that a talk about the role of jet fuel in the collapse of the Twin Towers between Mohammed and eventual detainee Majid Khan sparked another plot to blow up gas stations. With the help of two to three African-American Muslim converts, Khan planned to break into the huge underground fuel tanks and plant an explosive inside.

The gas-station plot, as well as plans to target suspension bridges, were revealed in 2003 to news media by sources familiar with the questioning of Khalid Sheikh Mohammed.

Townsend, however, cautions that not all the plots divulged in the interrogation rooms were credible.

"That's part of the problem with the WikiLeaks dump of documents. Many of the things that are dumped out there are things that the intelligence community and law enforcement looked at and dismissed as not credible," she said. "Not all of it just because it was written down are things that were actually believed."

One detainee, Bashir Lap, expressed his desire to marry four wives and have 12 children with each wife to create his own jihad army, for example.

"As ridiculous as some of these sound, you realize you have to step back, you need technical experts to explain to you is this possible, if it's possible how likely is it to be successful, and what would it require on our enemies' part to carry such an attack off successfully," Townsend said.

The documents also show Khalid Sheikh Mohammed expressed displeasure with convicted shoe bomber Richard Reid's unsuccessful attempt to blow up an airplane in flight. Mohammed called Reid "irresponsible," saying he told him to shave his beard prior to boarding the airplane and to detonate the shoe bomb inside the airplane bathroom. Reid did neither.

And in the category of failed plots, the documents say the self-proclaimed enemy of the United States noted that because he did not hit the White House during September 11 attacks, as he planned, he would "somehow try to attack the White House again one day, due to its symbolic value to America."

CNN's Chris Lawrence and Pam Benson contributed to this report.