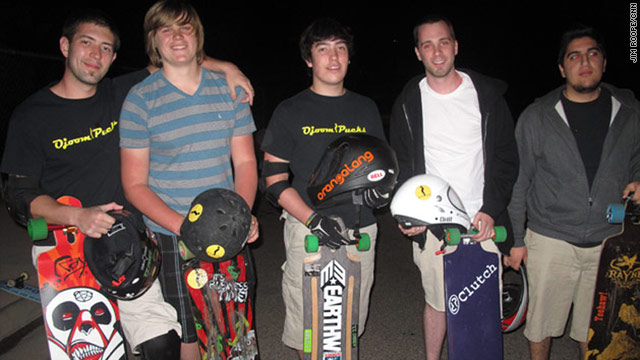 Burbank, California (CNN) -- Downhill long-board skateboard racing is making a comeback in the United States. It's considered a gravity sport along with downhill luge racing. That's when skateboarders lay down on their long boards and race downhill. But in this downhill skateboard racing revival, the skaters are standing up.

Ryan Lowery, 23, is an admitted adrenaline junky who meets with friends a few times a week on a hillside road in Burbank, California.

"When you're coming down this hill, you're thinking about nothing. You're thinking about what's in the moment. It's like your whole mind just shuts down," Lowery said. "You can turn a bad day into a good day after just a few minutes of downhillin' man."

You can also turn a good day of downhilling into a bad one if you wipe out at speeds of 40-plus mph. But Bob Ozman, vice president of the International Gravity Sports Association, headquartered in Southern California, said injuries are rare during sanctioned racing events.

"We require the full-face helmets, full gloves, full leathers. We do not allow these guys to come out with just kneepads and shorts or the butt pads, we really push safety," Ozman said.

Lowery said he understands why riding skateboards on private property could be viewed as a nuisance, but said he doesn't find it dangerous.

"No one seems to mind it when street bikes or mountain bikes come down a hill at 50 mph," he said. "It takes them up to 50 feet to stop. I can stop in 10 feet from the same speed," he said.

However, law enforcement officers such as Burbank Police Sgt. Robert Quesada question the safety of the sport.

"We're not anti-skateboard, we're anti-injury," Quesada said. "We don't want to see kids, or people, adults, getting hurt because of things they're doing that are dangerous," he said.

The sport began in Southern California in the 1970s but didn't catch on. It grew in Canada and Europe before coming back to the United States and gaining in popularity a few years ago, according to Ozman.

"I think with Europe it's a lot easier for promoters to find a lot of roads to sanction these events, where here (in the United States) it's a little bit tougher," said Ozman.

But times may be changing for this evolving sport. There is a world championship event starting June 29 in Goldendale, Washington, and for the sixth year in a row, a national race will be held this summer in Long Beach, California.