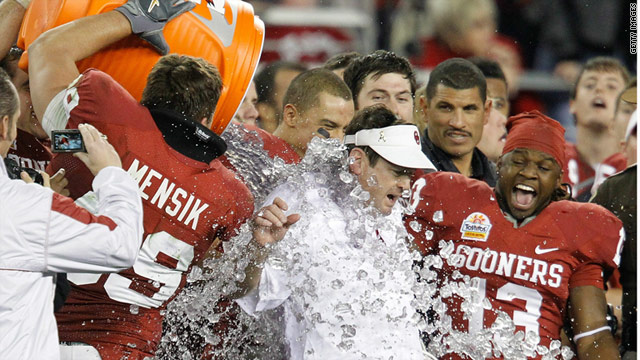 (CNN) -- College football's Bowl Championship Series says it will fine the Fiesta Bowl $1 million and impose other sanctions after the bowl reported that it had, among other things, reimbursed employees for political contributions they made allegedly at bowl leaders' encouragement.

The Fiesta Bowl can remain a part of the BCS, a system that determines the national college football champion, if it adheres to all sanctions, the BCS said Wednesday.

Had the Fiesta Bowl not implemented its own reforms when it self-reported in March, BCS investigators "almost certainly would have recommended the termination of the BCS Group's involvement with the Fiesta Bowl," a BCS report said.

Although the BCS looks intent on keeping the Fiesta Bowl, the NCAA has yet to decide whether it will continue to license the game.

"The NCAA postseason bowl licensing subcommittee will review the (BCS) report as it considers whether to reaffirm the Fiesta Bowl and Insight Bowl licenses for the coming season," NCAA Vice President of Communications Bob Williams said Wednesday.

The Fiesta Bowl operates not only its own January bowl game in Glendale, Arizona, but also the Tempe-based Insight Bowl and -- once every four years -- the BCS National Championship Game. The Fiesta Bowl's organizers operated January's BCS title game, in which Auburn defeated Oregon 22-19 in Glendale.

The Fiesta Bowl in March fired its president/CEO and released a 276-page internal report saying the bowl had made allegedly illegal reimbursements to employees who had made political contributions to certain candidates for local, state and federal office.

In the report, employees and former employees said their bosses encouraged the political donations and indicated they would be repaid. The report revealed the bowl reimbursed at least $46,539 since 2000 to at least 21 people, including current or former employees, their spouses and one volunteer.

Besides firing CEO John Junker, the bowl's board of directors said in March it would hire a chief compliance officer to oversee regulatory matters, review compensation to senior staff, and establish a whistleblower hot line that would be monitored by an independent company.

In its report Wednesday, a BCS task force that examined the bowl's report lauded the reforms, but added that the sanctions and additional reforms were needed.

"The evidence strongly suggests that the bowl's executive staff frequently acted with scant regard for ethics and proper conduct," the report said.

The BCS said it intends to direct the bowl to pay the $1 million to charities that benefit Arizona's youths.

Besides the fine, the BCS said the bowl should remove board members who are found to have acted inappropriately, have at least two board members who have a collegiate administration or faculty background and submit to independent internal-control audits and more extensive financial audits.

"The Fiesta Bowl Board of Directors understands and accepts the sanctions imposed by the BCS," Fiesta Bowl Board Chairman Duane Woods said in a statement released Wednesday. "We think that these tough but fair measures are consistent with our commitment to reform the Fiesta Bowl's governance and rebuild trust."

A 2009 Arizona Republic report in which bowl employees alleged they were reimbursed for campaign contributions triggered a state investigation that eventually was referred to the state attorney general's office, which has yet to release a finding.

The bowl's first internal investigation, launched days after the Republic's report, was said to have found no credible evidence to support the allegations. But a second internal investigation began last fall after an employee came forward with information about alleged misconduct; that second probe led to March's report.

The BCS is administered by the 11 athletic conferences of the NCAA's Football Bowl Subdivision and the University of Notre Dame.