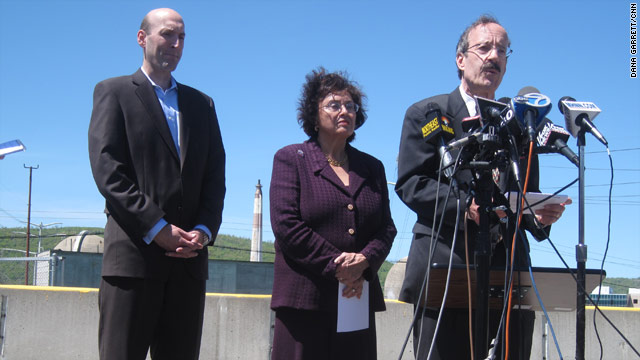 Buchanan, New York (CNN) -- The chairman of the Nuclear Regulatory Commission got a firsthand look Tuesday at the Indian Point nuclear plant on a visit organized by two members of Congress from New York who want the plant shut down.

Chairman Gregory Jaczko toured the plant with longtime Indian Point opponents Rep. Nita Lowey and Rep. Elliot Engel, who have been raising concerns about the safety of the plant following the earthquake and tsunami in Japan that seriously damaged the Fukushima Daiichi nuclear plant.

"As I have repeatedly stressed to (plant owner) Entergy and the NRC, I continue to have serious concerns about several specific issues related to Indian Point," Lowey said at a press conference following the tour.

Indian Point is on the Hudson River, 35 miles north of midtown Manhattan.

Among the chief concerns raised by Lowey and Engel is the feasibility of evacuating such a populated area in the event of an emergency.

"The bottom line," said Engel after the tour, "I still believe Indian Point should be closed."

Jaczko said the visit was a good opportunity to hear firsthand from the representatives about their concerns. "I think it's so important that we continue to have a very open and transparent dialogue," he said.

Asked whether the proximity of the plant to such a densely populated area was sufficient reason to close the plant, as many New York officials have argued, including Gov. Andrew Cuomo, Jaczko said he couldn't comment since Indian Point is undergoing a formal relicensing effort right now.

There are two reactors at Indian Point. One is due to be relicensed in 2013 and the other in 2015.

Jaczko said the agency closely monitors the operation of all nuclear facilities "to ensure that they meet our very stringent safety and security requirements." Indian Point, he said, meets those requirements.

Lowey and Engel have introduced a bill that would require the NRC to use the same standards it uses to license new nuclear plants when relicensing older plants, "including evaluating terror threats, seismic risk, population density and evacuation concerns," Lowey said.

Engel, who first called for the plant to be closed following the 9/11 terrorist attacks, said, "If this plant were being built today, in 2011, I can tell you it would not be sited here in Buchanan, New York."

Lowey said new data showing that Indian Point is located at two fault lines means the NRC should also evaluate whether a seismic event could affect the power supply or cause the spent fuel pools to leak.

Jaczko said as part of relicensing, the NRC looks at the seismic qualifications of plants to ensure that all systems will continue to operate safely. A task force of "top-notch experts" at the agency is looking at all the challenges and issues that emerged following the earthquake and tsunami in Japan, he said.

"I expect that we'll learn some good lessons, and I expect there will be some changes to our requirements as a result of that," he said.