(CNN) -- The Canadian woman who was rescued after being stranded and alone for 49 days in a Nevada wilderness left behind handwritten notes about her ordeal, officials said Monday.

The notes were found in the van where Rita Chretien was found on Friday, said Owyhee County (Idaho) Sheriff Daryl Crandall. The van was in remote territory near where Oregon, Idaho and Nevada meet.

"Please help. Stuck" is the way one note begins. The call for help has a date written below it that simply reads "since Mar 19/11." According to officials, the date marks the last time anyone had seen Chretien or her husband.

The next line continues with "No food. No gas. Dead bat. (battery) Lost my way!" Then the writing gets smaller as the space on the paper begins to run out, the note now reads, "Al went to get help. Find Mountain City. Did not return!" And finally, the last words on the page written in red read, "Maybe died along the way?" 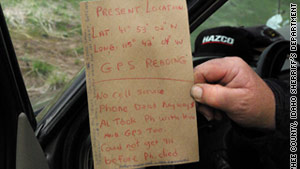 Written in smaller spaces on the paper in a different ink is the couple's name, where they are from, and their phone number. The note also gives name and number of the couple's son, and the date the couple is expected back in home.

A second note starts with detailed GPS readings on it, and then outlines the couples inability to get cell service in the rugged mountainous area.

Scribbled on the side of the second note is a message that started "We're headed to Vegas" and ended "Got lost."

Pictures of these notes were taken by the Owyhee County Sheriff's Department amid the weekend search for Albert Chretien, who remained missing three days after his wife's rescue.

He left his wife to get help three days after their minivan got stranded off-road in the cold, untamed wilderness.

That left Rita alone without much beyond some hard candy, a bag of trail mix, some books and the clothes she'd packed for her trip to Las Vegas. Plus, according to her son Raymond Chretien, she always had faith.

Scores of men and women had searched for the Chretiens since the Penticton, British Columbia, residents were last seen March 19 leaving a Shell gas station convenience store in Baker City, Oregon.

On Friday, more than a month later, hunters wandered into the area where the van was sitting.

Rita Chretien shot up from her spot in the 2000 Chevrolet Astro's backseat when she heard them outside, mustered her lingering strength to open the door and step out shoeless. She waved.

Three days later, she was in fair condition, resting comfortably in an Idaho hospital, spending time with her children.

Even the doctor who oversaw Chretien's care at St. Luke's Magic Valley Medical Center in Twin Falls, Idaho, acknowledged it was not easy to explain how a 56-year-old woman could have such a positive prognosis and demeanor given what she'd gone through.

"In this case, for a person with suboptimal nutrition to survive so long -- let's just say that it is understandable to call it a miracle," Dr. James Westberry told reporters Sunday.

While rainy and overcast weather forced authorities to call off the first day's air search for Albert Chretien, Cpl. Dan Moskaluk of the Royal Canadian Mounted Police said Saturday that a search dog and about 20 people, riding six to eight all-terrain and four-wheel drive vehicles were on the case.

A K-9 unit was also brought in by the Owyhee County Sheriff's Department to help search for the missing man on Saturday. Paula McCollum and her dog Viva covered about four miles in each direction looking for any sign of Chretien. But after the daylight started to fade and weather took a turn for the worse, search efforts came to halt.

McCollum said she was shocked that Rita Chretien was able to survive the cold, mountainous region alone, and she wished her husband had remained at her side.

"People keep going," McCollum said as she recounted her efforts to locate Albert Chretien, "they don't turn-around." But by backtracking the Chretiens may have found their way back to a road, she said.

Sheriff Crandall agreed. He said the couple's van was found five to eight miles from a ranch where they could have gotten help.

Pictures released by the sheriff's department show the van in a extremely remote area with no visible roads. The van was stuck in caked mud, ,a shovel pictured near the back of the van, indicating that someone had been trying to free the vehicle from the mud.

While the odds are dwindling that Albert Chretien will be found alive, authorities certainly are not ruling it out, said the police spokesman.

"Neither family nor investigators would have thought that we'd be reporting, after seven weeks, of actually finding somebody alive," Moskaluk said. "Until we know exactly what happened to Al, it remains a mystery."

Rita and Albert Chretien's stop in Baker City was recorded on the store's surveillance tape. They were en route to a trade show convention in Las Vegas.

But they later turned off the highway onto a forest service road that led into Nevada, intending to enjoy the "scenic route," said her son, who'd heard the full story from his ailing mother.

The couple took some wrong turns and had thought, based on their map, that their road was better than it was.

Then, about 20 miles from the highway, "apparently the road conditions ... degraded quite drastically," said Moskaluk, the police spokesman.

By the time darkness fell, the minivan had succumbed to the combination of snow and mud, and was unable to move.

On March 22, Albert Chretien left the van, setting off to get help. His wife, who Raymond Chretien said is "not an outdoorsy type of person," remained behind.

Rita Chretien rationed the little food available -- a beef jerky, some trail mix, fish oil pills, and one piece of hard candy per day. She'd go outside for a walk once a day, using the sunlight to melt snow for drinking water and going to a nearby stream.

In the meantime, she had plenty of time to read a few books (some several times) and the Bible, and record her thoughts in a journal.

"She did it because she didn't know the outcome of this," her son said, adding that he had not yet read the journal. "It was intended to sort of tell the story what happened over (those) days."

All the while, Rita Chretien got weaker, losing 20 to 30 pounds, according to Moskaluk.

Her son said that, in her last few days in the wild, she'd come to peace with the sense that her time was dwindling. She penciled May 6 as a critical day in her mind: -- either she'd be rescued or she'd die.

"She definitely had hope. But of course, just like us, every day goes by, you start preparing yourself for both options," her son said. "So she was prepared for either."

After her discovery, Rita Chretien was airlifted to the Idaho hospital.

There, doctors worked first to address her starvation and dehydration, then to build up her ability to eat meals again and gain strength.

By Sunday, Westberry said he still hadn't seen her walk, but he said there were no indications of long-term problems and her prognosis was good. Her spirits and evident desire to live, the doctor said, were even better.

"It is unusual for us to see someone in this type of situation to actually not only survive, but to be doing so well at this time," Westberry said. "She obviously had the mindset of survival, and that must have been something that helped her go as long as she did."

For her son, the best thing was how little his mother had changed after her ordeal. She laughed just the same, and was just as warm, genuine and caring as she'd always been, he said.

"I would have hardly known anything had happened to her," he said. "It was just beyond belief. It's just her. It's amazing."