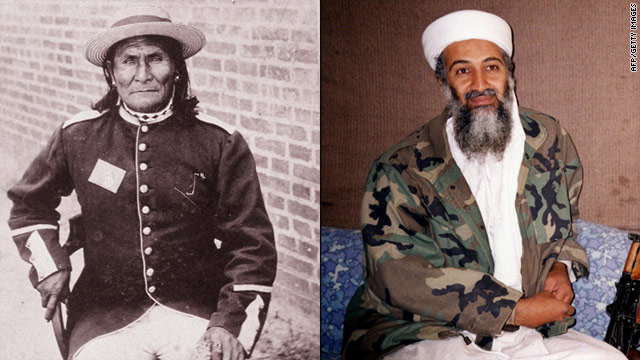 (CNN) -- In light of reports that linked the name "Geronimo" with the operation that took down Osama bin Laden, Native Americans expressed disappointment Thursday and pointed to the sacrifices they have made in the service.

"To associate a Native warrior with bin Laden is not an accurate reflection of history and it undermines the military service of Native people," said Jefferson Keel, president of the National Congress of American Indians. "It's critical that military leaders and operational standards honor the service of those who protect our freedom."

Initial press reports said that "Geronimo" was used in the raid to refer to bin Laden, but a senior administration official later told CNN that it was code for the act of capturing or killing bin Laden, not for the man himself.

Keel said that according to his understanding, the most-wanted terrorist's code name was "Jackpot," and the name of the operation was "Geronimo."

Geronimo was an Apache leader in the late 1800s who is revered by many in the Southwest as a hero, the NCAI said.

Harlyn Geronimo, a descendant of the warrior, was sharply critical of the use of his great-grandfather's name.

"Whether it was intended only to name the military operation to kill or capture Osama bin Laden or to give Osama bin Laden himself the code name Geronimo, either was an outrageous insult and mistake," he said.

To use the name is "such a subversion of history that it also defames a great human spirit and Native American leader," he said.

Thom Wallace, communications director of NCAI, said that whatever the reason behind the use of the name "Geronimo" and the debate over it, the real conversation was being lost. That conversation, he said, is about the 24,000 American Indian active members of the military. A disproportionately high number of Native Americans serve in the U.S. military, he said.

The group pointed out that 61 American Indians and Alaskan Natives have been killed serving in the armed forces in Afghanistan and Iraq, and 445 have been injured.

"Let's be very clear about what is important here: The successful removal of Osama bin Laden as a threat to the United States honors the sacrifice these Native warriors made for the United States and their people," said Keel, himself a veteran.