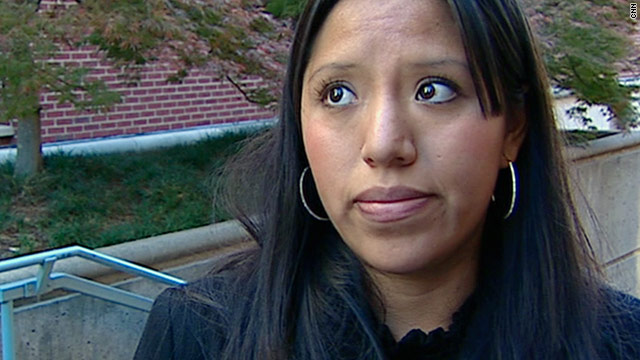 Atlanta (CNN) -- U.S. immigration officials have decided that an undocumented immigrant college student apprehended by authorities after driving without a license can stay in the United States for another year, the student said.

Reached by phone as she rushed to class Tuesday evening, Kennesaw State University student Jessica Colotl said the decision was "like a big present."

A spokeswoman for Immigration and Customs Enforcement, Danielle Bennett, issued a statement saying the agency "uses discretion on a case-by-case basis, as appropriate, and has the authority to grant a deferral of removal based on the merits of an individual's case and a review of specific facts." She would not elaborate on the merits of Colotl's case.

Colotl's immigration attorney, Charles Kuck, said his client was facing a deportation deadline later this week. On Friday, he filed a petition with Immigration and Customs Enforcement for an extension to stop the removal order, arguing that Colotl's graduation was days away, and asking for time to allow her to put her personal affairs in order. The petition also cited similar cases across the United States in which the deportations of undocumented students were being deferred.

Kuck said the extension was granted Tuesday, and it allows Colotl to apply for a work permit for the duration of the extension.

Colotl, who is scheduled to graduate next week with a degree in political science, became a lightning rod in the immigration debate last spring. Activists on both sides of the issue said her case was a symbol of a broken system.

Her legal problems started in March 2010, when police stopped her car on the Kennesaw State campus, saying she had been obstructing the flow of traffic in a university parking lot.

Born in Mexico but living in the United States since she was 11, Colotl could not produce a driver's license, so she handed over as identification an expired passport from Mexico.

She was arrested the next day and turned over to immigration officials.

The young woman spent more than a month in the Etowah Detention Center in Alabama.

Friends came out in force and marched on campus in Colotl's defense, and the university president spoke in support. In May, she was released and her deportation was deferred for a year to allow her to finish her studies.

But she was quickly arrested on a warrant from the Cobb County Sheriff's Office and released on $2,500 bail.

Cobb County participates in a federal program that allows jail officials to initiate deportation procedures for inmates believed to be in the country illegally.

"I'm just trying to live the American dream and finish my education," she said at the time.

Kuck said despite the reprieve, the chances that Colotl will be able to remain in the country are still slim. He said it will be much harder to get a third extension next year. She could also be barred from re-entering the United States for up to 20 years if she is deported.

CNN's Dan Gilgoff and Jessica Ravitz contributed to this report.