NASA: Endeavour's earliest launch will be end of week 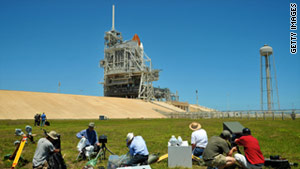 Kennedy Space Center, Florida (CNN) -- A plan to launch the space shuttle Endeavour on Monday has been scrubbed, and a new launch likely will not come before the end of the week at the earliest, officials said Sunday.

Endeavour's final launch was delayed by at least 72 hours Friday because of concerns about the shuttle's heating system. Monday was the earliest possible liftoff date following the delay.

As part of NASA's examination of the problem, officials said, the external fuel tank was drained of its hydrogen and oxygen propellants Friday night.

A new launch date has not been set, Mission Management Team chairman Mike Moses told reporters Sunday, but "it's not going to be any earlier than the 8th."

The problem has been determined to be "a power problem." he said.

The crew, their families and support staff were being allowed to travel home, Moses said.

The delay postponed what promised to be an emotional moment for the shuttle's commander, Mark Kelly. Kelly's wife, U.S. Rep. Gabrielle Giffords, traveled to Florida to watch the shuttle's ascent. Giffords was nearly killed January 8 when she was shot in the head by a would-be assassin at a public event in Tucson, Arizona. She has been recovering at a Houston rehabilitation hospital.

Giffords flew back to Houston and TIRR Memorial Hermann hospital on Sunday, according to a post on her official Facebook page. She will have "a couple days of good therapy" before traveling back to Florida for the launch, the post said.

After the launch, Giffords' office said in a statement that "Congresswoman Giffords is disappointed that Endeavour was unable to launch today, but realizes that mission safety must come first. Launch delays are not uncommon with the space shuttle," the statement said. "We are looking forward to the quick rescheduling of this scientifically important mission. The congresswoman was pleased, however, to have been able to meet with President Obama and the first family."

President Barack Obama and the first lady also went to the launch site, and Obama personally visited with Giffords for about 10 minutes, a White House official said. Obama also met the entire Endeavour crew, including Kelly.

Fincke spent a total of a year in space on the International Space Station, getting there and back twice on Russian rockets. But Friday's delayed flight will be his first on the shuttle.