Divided by a river: Two states grapple with rising floodwaters 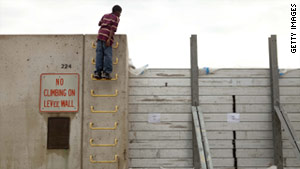 A boy in Cairo, Illinois, looks over a levee wall holding back floodwaters from the Ohio River.
STORY HIGHLIGHTS
RELATED TOPICS

(CNN) -- A mandatory evacuation was issued Saturday for a southwestern Illinois town threatened by the rain-swollen Mississippi River, an order that was issued as the U.S. Army Corps of Engineers weighed whether to blow up a levee and flood rural farm communities to save the town.

Heavy rains have pushed the river to near-record levels, putting pressure on a tributary system that began buckling days earlier when a levee failed and flooded a handful of rural towns in southeastern Missouri.

"I know that the price being paid is high," said Maj. Gen. Michael Walsh of the Army Corps of Engineers, who told reporters during a briefing that he had flown over a number of the affected communities.

With more rain predicted and the deterioration of a levee near Cairo, Illinois, the town's mayor, Judson Childs, ordered his 2,800 residents to leave by midnight.

Walsh told reporters that a decision whether to blow a 2-mile hole in the levee to save Cairo will be dictated by the conditions.

"The decision clock has been rolling," he said.

But the decision whether to blow up the levee has pitted Illinois and Missouri against one another in recent days, with Missouri filing a federal lawsuit to block the Corps. Illinois joined the Corps as a defendant.

A federal judge ruled Friday against Missouri, saying a 1928 law permitted the breach of a levee to ease pressure on the river.

Caught in the middle, though, are residents on either side of the river, which threatens to swallow communities in Missouri and Illinois.

"People are losing their jobs. They're losing their homes. They are losing the beds they sleep in at night. All because of this flooding," said Aaron Mitchell, 48, who worries breaching the levee could overwhelm smaller tributaries that could flood his home.

Mitchell is also concerned about where the water released under the Corps' plan would go since much of the land in the area is already under water because of heavy rains.

"Where is all that water going to go?" he said.

The plan calls for engineers to use explosives to breach the Birds Point-New Madrid levee, flooding 130,000 acres of Missouri farmland that has been designated as a flood plain. About 90 families who live in the area have already been evacuated, Missouri officials have said.

Illinois and Missouri have called out hundreds of National Guard soldiers to help evacuate communities and protect vacated communities.

But while government officials were divided by the decision to breach the levee, residents on both sides of the river appeared to be pulling together.

Families forced to flee were being offered shelter in area hotels and at local churches, according to county officials.

A car dealership in Sikeston, Missouri, was allowing residents forced to leave their homes to store furniture and other personal belongings in buildings on their lot, while some restaurants in the area were providing food to the displaced.

"Everybody is pulling together," Mitchell said.

While Walsh said a final decision has not been made to breach the Birds Point-New Madrid levee, he has begun preparations by ordering barges that would be used in the operation to move toward the levee.

Engineers have reported sand boils and seepage at a number of levees near the confluence of the Ohio and Mississippi rivers, a condition that Walsh said also threatens the integrity of the Mississippi River and Tributaries Project -- the world's largest flood control project.

"There is water in places where we have never ever seen it before," Walsh said.

Engineers have warned that should the rising waters of the Mississippi River overwhelm the entire flood control project, it could deluge cities, destroy crops, destroy businesses and paralyze river transportation.