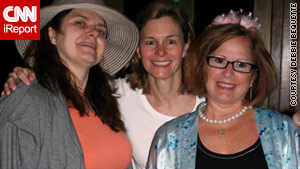 (CNN) -- Julie Sculley got married in a hotel that looks like a castle. There was no way she was going to miss the ultimate royal fairy tale.

The 37-year-old mother of one from Framingham, Massachusetts, took the day off work Friday to watch Prince William and Catherine Middleton tie the knot. Like so many wedding fans and Anglophiles -- you know who you are -- she was up before dawn, camped on the living room couch, watching the bride make the magical transition from mere commoner to Duchess of Cambridge.

And yes, she may have shed a tear or two.

"The anticipation kind of catapulted me into this somewhat weepy state," she admitted after a bit of prodding.

By all accounts, Sculley was in good company. Countless Americans from coast to coast woke unusually early to mark the day. Some attended royal wedding parties complete with tea, scones and, in a few cases, clipped British accents.

"There's something about William and Catherine," Sculley said. "It's so romantic, and I love all the tradition. It's just not something you get to see every day."

Down South in Atlanta, Sally Gachunji rose at 4 a.m. ET to ensure that she did not miss a thing, from the wedding dress to the bride's long walk down the aisle at Westminster Abbey.

"I'm actually on a conference call with some pals. Oh, my God, did you see those hats?" she said breathlessly. "I cannot miss it. This is history. It is an opportunity to watch a modern-day fairy tale."

Across town, Christy George, 41, gathered with a group of friends -- nicknamed the duchesses -- in the Atlanta suburb of Marietta.

The duchesses, decked out in frocks and fancy hats, munched on petite cucumber sandwiches as they waited for the royal couple's first public kiss.

"It's sort of like a fairy tale, an escape from ordinary life for a while," said George, with a light purple hat adorned with a flower perched on her head.

Americans, who once fought a war to escape the rule of a British monarch, are fascinated by royalty, she said.

"The whole country is enamored because we don't have that here. ... I remember watching Princess Diana's wedding as well," George said.

Events at George's gathering included a hat-making contest, with the winner getting a replica of Princess Diana's ring.

Royal fans say it is easy to relate to Catherine and her princely husband.

Catherine "is a commoner who fell in love with a prince, and for a romantic like me, that's huge," Gachunji said as she sipped a cup of tea. To spice up her viewing experience, the 32-year-old spoke to her friends in a British accent, using words such as "cheerio" for goodbye.

In Tennessee, Dena Oneal woke at dawn but had to persuade her family to part with the remote.

"My husband and two sons did not want to watch it at first, but it's a once-in-a-lifetime event," the Murfreesboro resident said.

"Just seeing the ceremonial aspect of having royalty, the carriage, the hats, the ornamental aspects -- it turned out to be a royalty learning experience for them."

Lise Caldwell, a 37-year-old freelance writer from Indiana, set her alarm for 4:45 a.m. On Thursday night, she went over to a friend's house to make scones. The two had them during the wedding, with cream and jam.

"I was a little girl when Charles and Diana got married," she recalled. "I was absolutely obsessed with it. ... I wanted to see their son get married."

"I'm a grown woman," she said. "I have a sense that it's a little bit ridiculous to get up and watch someone else's wedding but it's fun."

Jennifer Slocumb, a resident of Roswell, Georgia, said the pomp and circumstance of Friday's pageantry were welcome distractions from the news at home.

"We don't have exposure to the politics or costs of it," she said. "We just see a handsome man and beautiful woman all dressed up."

A number of festivities were held nationwide Friday as businesses capitalized on the wedding.

The Ritz-Carlton Hotel in the Washington neighborhood of Georgetown was hosting a royal viewing party with accommodations the night before.

The package, which was not exactly free, included cocktails named after the couple and engraved champagne flutes.

And of course, a modern fairy tale is not complete without a technology twist: The hotel allowed guests to use its iPad interactive feature to add to the viewing experience.

In New York, venues such as Trinity Church touted royal ties with wedding screening. The gothic Anglican church got its charter from England's King William III in 1697.

On the West Coast, Madame Tussauds Hollywood was hosting an "all-nighter" viewing.

The Los Angeles facility, which features a museum for celebrity wax figures, displayed the broadcast of the royal wedding live starting at 1 a.m. local time.

Its broadcast featured special guest appearances by singer Elton John and soccer star David Beckham -- in the form of their $300,000 wax likenesses.

"It's a once in a lifetime chance to experience history," Madame Tussauds said in a statement.

The real Beckham and John attended the wedding in London.

Scores joined the viewing on televisions worldwide, with British Culture Secretary Jeremy Hunt predicting that the ceremony would be seen by an estimated 2 billion people.

Royal fever, however, may not quite so widespread in Britain. Just under half of British respondents to a recent poll said they were planning to watch it on television, and 56% said they were not interested.

Back across the pond, there was a price to be paid for the royal devotion.