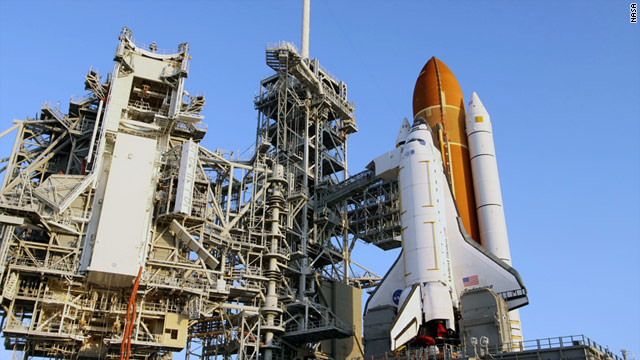 Kennedy Space Center, Florida (CNN) -- As Space Shuttle Endeavour gears up for its 25th and final mission, its first commander is nostalgic but hopeful about the prospects of space exploration.

"I will have a good size lump in the throat on Friday, if not a tear," Capt. Daniel Brandenstein said.

Few outside the space community know Brandenstein, who was the commander on Endeavour's first flight in 1992.

"The vehicle on its maiden voyage performed flawlessly," he said.

Endeavour, which was built as a replacement for the Challenger that exploded after liftoff in 1986, was sent to repair an ailing satellite.

"The vehicles are very similar on purpose, so you could train on one and move to the next one without a lot of retraining," he said.

Brandenstein says it's too early to retire the spacecraft and believes it has many good years left.

"You got a vehicle that's only used up about 25 percent of its lifetime, and it's going to end up on a post," Brandenstein said, referring to the California Science Center in Los Angeles, where Endeavour will be displayed to the public.

He learned it's not easy to watch a retiring shuttle when Discovery landed for the final time last month.

"I'm not a very emotional guy, but I kind of got choked up on that," said Brandenstein who was the commander on a Discovery mission in 1985.

Watching his company make cutbacks when the 30-year shuttle program ends this summer will be hard, he said.

Brandenstein is the chief operating officer for United Space Alliance, an aerospace company that is contracted to manage the space shuttle program.

The company has announced it will layoff at least 2,600 of its 5,600 employees after the last shuttle flight.

Brandenstein, who spent 14 years at NASA and was inducted into the Astronaut Hall of Fame, says he had one ritual before his four shuttle missions.

"The night before, I would go out and run and get dehydrated, and I wouldn't drink anything until I got in orbit," he said.

Going to the bathroom once suited up and inside the shuttle, meant doing it without leaving the seat.

"Unfortunately, the commander has to get in first and spends the most time on his back in those uncomfortable suites," he said.

Brandenstein says after grueling months of training in Houston, he enjoyed coming to Florida to spend the final days before a launch.

"If you planned your mission right and trained it right, it's really a time to unwind and it's time to relax and go fly," Brandenstein said.

Brandenstein believes the current Endeavour commander, Mark Kelly, will do the same.

Kelly is an experienced astronaut flying his fourth and final shuttle mission. His wife, U.S. Rep. Gabrielle Giffords, is there to watch the liftoff. The Arizona congresswoman was shot in the head less than four months ago.

"Flying in space is a very difficult thing to give up," Kelly said. "I've got to figure out a way to get back into space again."

As the shuttle prepares for a scheduled 3:47 p.m. ET. launch, Brandenstein says Mars should be the next target.

"We got lower Earth orbit pretty well covered now, so we ought to move beyond that," he said.

Despite the nostalgia over Endeavour's final mission, the man who logged almost 800 hours in space is counting his blessings.

"I got to fly a spaceship, it doesn't get any better than that." Brandenstein said.