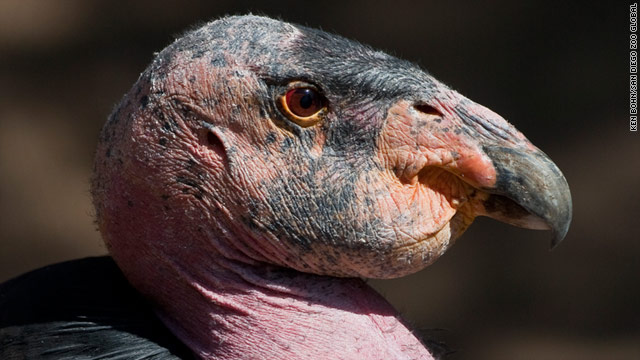 The condor population is 394, including 181 in the wild. Experts hope to hit 400 condors by the end of breeding season.
STORY HIGHLIGHTS
RELATED TOPICS

Los Angeles (CNN) -- Almost 25 years after the California condor went extinct in the wild and dwindled to just 27 birds in captivity, North America's largest flying bird is on the verge of a watershed moment: Its total population is projected to hit 400 this spring, including 200 birds thriving in the wild.

The projections come as curators are reporting a successful hatching season at breeding centers in California and elsewhere.

"At the end of the breeding season, we should be at 400 if all goes to projection," said Michael Mace, curator of birds at the San Diego Zoo Safari Park. "At the end of this year, we could have 200 birds in the wild. Both would be significant milestones."

The condor population is currently 394, including 181 in the wild -- a marked improvement since 1987 when the condor was wiped out in the wild and only 27 lived at the San Diego Zoo, he said.

The success hasn't been without new challenges.

While the nearly 200 birds in the wilderness are resuming feeding activities last seen during the Lewis and Clark Expedition of the early 1800s, the condor is now ingesting the toxin DDE when eating marine carcasses, Mace said.

DDE is formed when the pesticide DDT breaks down. DDT is banned in the United States, but the chemical enters the environment through its use in other countries.

"Some of these factors we're dealing with right now weren't factors five, 10 years ago," Mace said.

For example, California condors are now being vaccinated for the West Nile virus, Mace said.

The California condor lives in the isolated areas of California, Arizona and Baja California, Mexico, where mankind reintroduced the birds after they were effectively eradicated from the wilderness, according to Mace.

They weigh up to 29 pounds, have a wingspan reaching up to 9½ feet and live up to 60 years. Their habitat is wooded mountains and scrub lands, according to the San Diego Zoo.

For all the worldwide attention the species enjoy, the condor's feeding habit is among the most inelegant: They are vultures that feed on carrion, large and small. They will eat big animals -- deer, cattle, sheep. And they will eat small animals -- rodents, rabbits, fish. The carrion has sometimes been killed by a hunter's gunshot. The lead from the buckshot can also poison the condor, Mace said.

The condors gorge themselves on two to three pounds of carrion at a time and can fast for several days until they find another carcass.

The ignominious status of scavenger aside, the condor still holds the high stature of flagship species, which the polar bear also enjoys.

In the ecosystem, the California condor serves as Mother Nature's cleanup crew, feeding on dead animals to prevent them from spreading disease to other wildlife and plants.

Because the vulture is active in parts of California, Arizona and Mexico, about 50 other endangered animals and plants are able to thrive -- thanks to the condor, Mace said.

The hatching season runs from March until May, he said.

"This is the peak season for us," Mace said.

The warmer weather in Oregon has led to a banner year for condor eggs at the Oregon Zoo, with a total of nine chicks so far, the most since the zoo began participating in the condor conservation effort in 2004, said Kelli Walker, a condor keeper at the zoo's Jonnson Center for Wildlife Conservation.

She also credited the growing maturity of the zoo's condors.

"It sounds silly, but we had some really nice weather," Walker said. "This year, we had some of the first eggs because they bred earlier.

"Oregon is having the biggest year we have ever had," she added. "We got eight eggs in eight days."