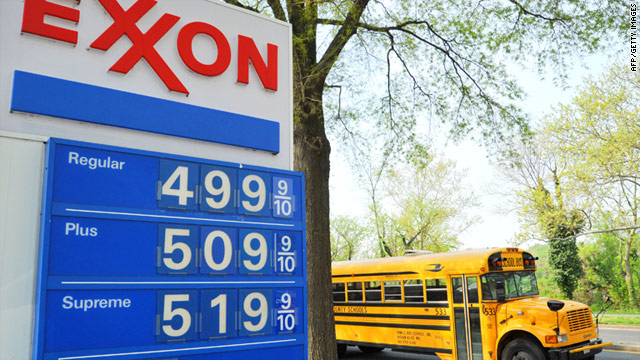 Regular gas is nearly $5 a gallon at a service station this week in Washington.
STORY HIGHLIGHTS

Washington (CNN) -- Prodded by growing public frustration over sharply rising gasoline prices, the Justice Department on Thursday announced the formation of a team -- the "Oil and Gas Price Fraud Working Group -- tasked with the goal of ensuring consumers are not victims of price gouging.

Gas prices exceeding $4 per gallon or higher are "tough" for most Americans, President Barack Obama told an audience in Reno, Nevada. "We are going to make sure that no one is taking advantage of American consumers for their own short-term gain."

"This gas issue is serious," the president said. "It hurts."

CNNMoney: Why is gas outpacing oil in price?

Attorney General Eric Holder made no secret the move is a direct response to public angst, not to current evidence of any illegal conduct.

"Rapidly rising gasoline prices are pinching the pockets of consumers across the country," Holder said in a written statement released at the Justice Department.

Gas price jumped while he was still pumping

How high will gas prices go?

"We will be vigilant in monitoring the oil and gas markets for any wrongdoing so that consumers can be confident they are not paying higher prices as a result of illegal activity," he said.

The working group will report to the existing Financial Fraud Task Force, which in turn reports to the attorney general.

The new working group will be composed of representatives of the Justice Department, the National Association of (State) Attorneys General, the Treasury Department, the Energy Department, and several financial regulatory agencies.

Holder said he is asking the group to explore "whether there is any evidence of manipulation of oil and gas prices, collusion, fraud, or misrepresentations at the retail or wholesale levels that would violate state or federal laws."

iReport: What are gas prices like where you live?

While promising official vigilance, the attorney general acknowledged regional differences in gasoline prices, and said, "It is also clear that there are lawful reasons for increases in gas prices, given supply and demand."