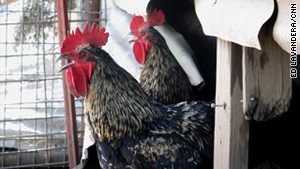 Roosters are left unscathed after a fire engulfs most of Lonnie Creswell's property near Graham, Texas.
STORY HIGHLIGHTS
RELATED TOPICS

Are you there? Share photos, video with CNN iReport

She and her family were driving home from a softball tournament Sunday afternoon as the fire rolled toward their home on the southern edge of Graham, a small town in Young County.

She pulled up to her house and raced to load the car with as much as she could save. Her husband released livestock so the animals could try to run to safe ground. Local authorities ordered them to escape immediately.

Struggling to hold back tears, Creswell described driving to a nearby church and looking back at their property only to see the flames engulf everything.

"I just thank God we're alive," she said. "This (family house) can be rebuilt, but we can't be replaced."

The fire destroyed the Creswells' home, but it left a family of unlikely survivors. The flames rolled right over a rooster coop on the property, but when Creswell came back to assess the damage she found the roosters unscathed. It was the silver lining to a horrific day.

The Creswells said they'll rebuild their home in the same spot. They've lived on this land for 12 years and don't want to leave.

"There was generations of family heirlooms that can't be replaced," Creswell said. "But I've got the memories."

The wildfire that destroyed the Creswells' home is one of a series of blazes that are ravaging the area around Possum Kingdom Lake, about 100 miles west of Dallas-Fort Worth.

This massive wildfire already has torched more than 50,000 acres in four adjoining counties. Fire officials at a command center in Strawn, Texas, said 30% of this Possum Kingdom fire has been contained.

Fire crews from across the state are descending on the wildfires. Dustin Tidwell, for example, is a volunteer firefighter from Payne Springs, Texas, which is several hundred miles away from where he was working this week, fighting a flash fire in a wooded area south of Graham.

Most of the dry brush had already been scorched by the wildfire but hundreds of hot spots were still firing up. In this rugged terrain, smoldering embers can shoot up to 8-foot flames in a matter of seconds.

"It's very dangerous. I've never seen anything like this in Texas," Tidwell said moments after spraying water on a hot spot. "It's hot, it's hard work, but it's enjoyable. We're having a lot of fun out here."

Tidwell's youthful enthusiasm is needed at this moment. He's part of several strike teams trying to protect Graham. The wildfire is about five miles from the town and its 10,000 residents.

Young County Sheriff Bryan Walls said he's confident firefighters will be able to keep the wildfire from getting into town but high winds still pose a dangerous threat.

Many of the small country roads south of Graham have been closed off as the wildfires jump across roadways and fire crews crisscross the back roads to put out the flames.

Firefighters early Monday experienced a tense situation when the wildfire rolled over a tanker next to an oil well. The tanker erupted and the explosion rattled homes more than five miles away. Even 15 hours later, black smoke was billowing from the scene.