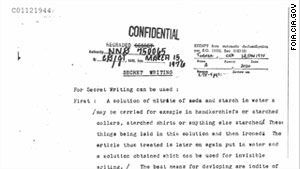 The papers date as far back as 1917, and they were among the United States' oldest classified documents.
STORY HIGHLIGHTS
RELATED TOPICS

But the writing does not denote the characters Ron Weasley saying, "There's nothing written in this diary," and Hermione Granger responding, "It must be invisible ink!"

These are newly-declassified, nearly century-old CIA documents, typed and hand-written with titles like "Secret Writing" that, among other things, divulge formulas for making and uncovering invisible ink.

The six papers date as far back as 1917, and until their release on Tuesday were among the United States' oldest classified documents.

One of them lists ingredients used in German secret ink.

Whereas the Harry Potter character Hermione can simply command "Aparecium!" to make the words appear on the page, these documents indicate early 20th century spies had to employ much more elaborate methods.

The CIA released the documents to the public because the information contained in them is no longer considered to be sensitive. They are believed to be the only remaining classified documents from the World War I era, according to the spy agency.

"These documents remained classified for nearly a century until recent advancements in technology made it possible to release them," CIA Director Leon Panetta said in a statement. "When historical information is no longer sensitive, we take seriously our responsibility to share it with the American people."

A related document in English tells spies how to expose the German correspondence, starting with the instruction, "examine through powerful beam of light directed on surface at different angles."

The instructions continue with spy novel-type techniques, including dusting a little powdered charcoal over the paper's surface.

"Run a hot iron over the surface being careful not to scorch the paper," the instructions say. "Wet with water."

The directions resemble a mix of the scientific and simple, calling for chemicals such as hydrogen sulphide and ammonia, with instructions to "rinse with water and dry in the air."

A few other steps include wetting the paper with iron sulphate and a "little solution of potassium ferrocyanide," all of which, according to the document, collectively expose a host of other substances like iron and copper used to conceal writing, thus revealing the words and making the pages readable.

The "secret writing" document instructs spies how to disguise their correspondence.

The directions call for a nitrate and starch solution, which, according to the document, "may be carried for example in handkerchiefs or starched collars."

"A tumbler of water is boiled together with a table spoon of starch, allow to cool, and add ten gramms (sic) of nitrite of soda," the instructions say.

One of the CIA documents outlines detailed instructions on how to open a sealed letter without detection, largely by using chemicals including acetone and amyl alcohol.

"Heat in water bath -- Steam rising will dissolve the sealing material of its mucilage, wax, or oil," the instructions read. "Do not inhale." Mucilage is a type of glue.

Another document is a memorandum evaluating different samples of ink. Some samples were found to be "very corrosive" on steel pens, and deemed more suitable for a quill pen.

The original papers are housed at the National Archives and copies are now available on the CIA's website and at http://www.foia.cia.gov/.