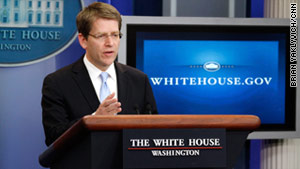 White House spokesman Jay Carney said there had been a "dramatic increase" in NATO sorties Sunday and Monday.
STORY HIGHLIGHTS

Washington (CNN) -- U.S officials defended America's role in the NATO-led mission in Libya Monday, amid criticism that Washington is not doing enough as the coalition struggles.

White House spokesman Jay Carney downplayed reports that NATO is running out of munitions to fight the war.

Carney told reporters that "a dramatic increase" in NATO sorties Sunday and Monday "demonstrates the capacity of NATO to fulfill its mission" in securing a no-fly zone over Libya.

"We have no plans to change our posture," he said.

At the State Department, Assistant Secretary of State Philip Gordon said if NATO commanders need assets that can only be provided by the United States, they can ask for them, and the U.S. would consider those requests.

The horror in Misrata grows

"The U.S. has other assets in theater," Gordon said, and "at this time those commanders have not asked the United States to do so."

What is Gadhafi's fate?

Gordon, recently back from a trip with Secretary of State Hillary Clinton to Berlin for informal NATO meetings on Libya and other other global trouble spots, said concerns that NATO may be running short of ammunition and ordinance "was not in any way a dominant theme of the discussions in Berlin."

Gordon said President Barack Obama was "clear from the start" that the U.S. would take the lead in the initial phase of the campaign before transitioning to a more supportive role, but that the U.S. is "constantly assessing how we can make sure that we are meeting our goals and acting as efficiently and effectively as possible."

He said he disagrees with critics who question whether NATO is succeeding in its mission, saying, "The mission has successfully protected a large number of Libyan civilians."

"We have already stopped any of (Libyan leader Moammar Gadhafi's) planes from flying, and without what we have done so far, you can be sure that Gadhafi would be using airplanes to strike civilians," Gordon said.