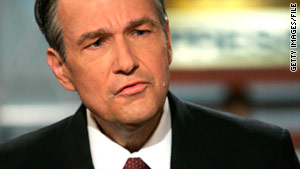 (CNN) -- The U.S. ambassador to Malta has submitted his resignation, just over a week after he was called out in a State Department report for allegedly devoting time to writing about religion at the expense of his official duties.

Douglas Kmiec told CNN that he notified Malta's foreign ministry on Saturday about his intention, the same day he submitted his resignation to U.S. Secretary of State Hillary Clinton and three days after he tendered a similar letter to President Barack Obama.

"With my reputation impugned by the recent ... report, I can no longer be certain that I am in a position with my government to have your needs and perspectives heard in the best possible light," Kmiec said in an e-mailed statement.

The State Department had no immediate comment Saturday on the ambassador's submitted resignation, including whether or not it had been accepted.

Kmiec, the former dean of the Catholic University of America's law school, defended his actions in his official letters and statement. He was appointed in 2009 -- a year after the "Kennedy Democrat and Reagan Republican," as he'd described himself in his letter to Clinton, spearheaded Obama's outreach to Catholic voters in the 2008 presidential campaign.

Kmiec was very critical of the report, released last week from the U.S. State Department's inspector general, which criticized him for spending so much time writing and speaking about faith-related issues.

Since his appointment, the inspector general's report claimed that Kmiec has "devoted considerable time to writing articles for publication in the United States as well as in Malta," given his belief that he had a "special mandate" to promote Obama's interfaith initiatives.

"His approach has required Department principals, as well as some embassy staff, to spend an inordinate amount of time reviewing his writings, speeches and other initiatives," the report said, without citing any specific instances. "His official schedule has been uncharacteristically light for an ambassador at a post of this size."

"On average, he spends several hours of each workday in the residence, much of which appears to be devoted to his nonofficial writings," the report contends.

Kmiec told Obama, alluding to this report in his resignation letter, that he wanted to resign, given "some understanding of the difficulty and complexity of the challenges that you and Secretary Clinton each day."

Yet he remained defiant that the State Department report's conclusions were unfounded.

In his letter to Clinton, Kmiec said the report was based on "unsupported speculation that someone doing as much writing as I have done could not have also been devoted to the embassy mission."

"The contrary proof ... is the strength of our embassy," he wrote. "Our work is careful, thorough and timely, and I am fully apprised of all of it."

The ambassador claimed, in his letter to Clinton, that the inspector general report's authors had "failed to read any of my writing or see its highly positive effect on our bilateral relations." He also said the report's assertion that faith-based writings weren't relevant to his position represented a "flawed and narrow vision of our diplomatic mission."

Moreover, Kmiec suggested that the report amounted to payback from the State Department inspector general in response to a 1989 opinion he wrote -- as a top lawyer in the administration of George H.W. Bush -- restricting that office's jurisdiction.

"That opinion stung the (Office of the Inspector General) and I suspect I have just experienced a 'sting-back,' " he wrote in his letter to Clinton.

While he has worked for two Republican presidents and has made clear his anti-abortion stance differs from that of Obama, Kmiec said in his statement that he "would welcome (the president and himself) teaming up again."

Kmiec insisted that he had tendered his resignation "without pressure from either one or anyone."

"My resignation is not a product of force unless one means by force -- the force of principle," he wrote.