By Shaun Powell, Special to CNN 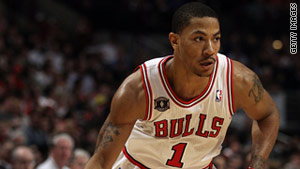 Editor's note: Shaun Powell is a columnist for NBA.com.

(CNN) -- He is someone you might want for a son. Except you can't adopt him. He's somebody else's favorite son. Derrick Rose, raised to be humble, groomed to be great, is Chicago Jr.

The place that gave birth to a bouncing basketball boy is thrilled that the kid, all grown up now, is still living at home. As the human blur of a point guard for the Bulls, Rose could become the team's first player since Michael Jordan to win the NBA's Most Valuable Player award. And while Rose may never reach the level of worship enjoyed by Jordan, there's a certain love for Rose that Jordan never knew. A love only a parent can give.

You see it nightly at the United Center, feel it in warm applause, sense it in a basketball season that's going Chicago's way. Rose justifies all the fuss with performances that manage to entertain fans and win games, a combination that makes him worth the price of admission alone. Really, what's not to love about a player with the speed necessary to reach the rim, and an improved outside shot that makes him deadly from 20 feet, and an air of confidence that has him and the city thinking anything's possible?

Here on the eve of the playoffs, where the Bulls will enter as the No. 1 seed in the East, he's pumping 25 points a game, good for seventh in the league, which would be fine if that was the whole story. But it is not.

He was born in one of the armpits of Chicago, a 'hood that would make Al Capone flinch, a place where kids like Rose don't need a GPS to find trouble. A quick pair of fists come in handy where Rose comes from, but best we can tell, all he ever beat up were stereotypes. Let's just say he doesn't carry himself in a way society has come to expect from young men raised on That Side Of Town.

Ego and me-me attitude? Oh, sure, he has one. Like any star who makes grown-ups slobber all over themselves, Rose brings a list of demands. A list the size of a postage stamp. And there's only one item on it: He asks for access to the Bulls' practice facility at all hours because sometimes the urge to work on his game dawns upon him at the break of dawn. Take last summer. After spending an entire day at his youth camp -- and you don't know the definition of "exhaustion" until you've worked with a few hundred boys with short attention spans -- Rose recuperated by shooting jumpers for a few hours at the team gym. And the season was still months away.

"I just want to win games and be true to my family, team, my teammates and the city," Rose said. "They've all given me so much."

Just recently, on a day off, he drove himself to his old high school to watch a few buddies in a pickup game. Yeah, that sounds exactly like what a famous 22-year-old athlete would do for a thrill in a city like Chicago.

"He had a great time," said Robert Smith, Rose's old coach and still the current coach at Simeon Academy. "It was a big deal to the kids at school but no big deal to him. He's just that way."

Rose will deliver a magnificent game, for example his 39-point effort against Orlando just last Sunday, and then rave about a screen set for him by a teammate. At the All-Star Game in Los Angeles two months ago, when Lenny Kravitz and a smoke machine introduced each player in a Hollywood-style opening, Rose gently waved and smiled slightly and quickly walked off the stage, looking somewhat embarrassed by the attention. In a sports era where players love to pull their jersey to celebrate a big basket, Rose pulls no stunts. No chest-thumping or fist-pumping or shimmy-shaking. He does not teach anyone how to Dougie. He leaves the screaming to the fans.

"He's just a grounded guy," said John Paxson, the Bulls' executive vice president of basketball operations. "The things that are most important to him are family and basketball."

If it seems Rose was made for this, that's because he was. When he began to outplay high school kids at age 7, the process began in earnest. His mother, a single parent, put her three oldest sons in charge of Derrick. They formed a brotherly shield around him, blocking out all unwanted intrusions, especially the aggressive reptiles known as street agents. At least one brother shadowed him everywhere: to and from school, games, practices and parties. They didn't want Derrick to fall through the cracks, to end up another sad statistic. Or to become an innocent victim like Ben Wilson, the famed Chicago schoolboy who was gunned down decades ago before he graduated from Simeon.

"The manner in which he was raised while he was little gave him a great perspective on life," Paxson said.

Derrick chose to wear Ben's number, 25, and continue the slain player's journey as a tribute. With his brothers' help, he stayed straight and avoided the most vicious double-team a young player can face: temptation and trouble. Perhaps he was protected too much; his SAT score was voided over suspicions that someone took it for him. Rose has always denied this, but after taking Memphis to the NCAA title game as a freshman, that season was wiped from the books by the NCAA. Rose went to the NBA where, fate had it, the hometown Bulls awaited.

"I was happy, because there was only one team I really wanted to play for," Rose said.

Not many local players get the chance to start their career, or spend most of it, with the home team. Some of that is merely by chance; Rose just happened to be the best player in college basketball and the Bulls owned the No. 1 pick in the draft. But some teams are allergic to drafting or trading for locals because they worry about the demands placed on the player: old blood-sucking friends and pressure to play well. When these players fail spectacularly the way Stephon Marbury did in New York with the Knicks, they crumble twice as hard. They're not locals anymore; they're home-groan.

"A lot of these guys didn't grow up in the best areas, and didn't have the best influences in their lives," Paxson said. "Sometimes you bring them back to that element, where people are trying to get something from them. Once we delved into Derrick and his family, if there was going to be an element, it would be handled. His brothers are still around and watching very carefully what's going on."

They're not the only ones. We're all watching what's going on: the early evolution of a star who's taking his status in stride. The most recent example of a local who became a hometown star was LeBron James spending seven seasons with the Cleveland Cavaliers (LeBron's from Akron, not Cleveland, but close enough). And we saw how that turned out. LeBron is welcome in Cleveland like a Steelers Super Bowl trophy.

"One of the things that impresses me about Derrick is he feels the responsibility to be the best, and to carry himself as a great player would," Paxson said. "He understands the position he's in and what's expected of him from his coaches, teammates, the organization and the community. There are some young players in this league who understand the right way to play the game, who are professionals and who are fantastic role models for this league. He's one of them. He gets it."

Before each home game, when the Bulls' starting lineup is introduced, the players are announced by position and where they attended college. With one exception. Rose is also announced as being from Chicago.

"There's a sense of pride involved, and it teaches something to young people around here," Paxson explained. "It's a story of a guy who didn't grow up with much. With the help of his family, he rose from grim circumstances. That's something people here need to look at, and also emulate."