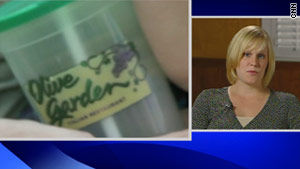 Jill Vanheest's 2-year-old son was given sangria on March 31 at an Olive Garden in Florida.
STORY HIGHLIGHTS
RELATED TOPICS

(CNN) -- Two mothers expressed outrage Friday night that their young children -- about 1,000 miles away and days apart -- were inadvertently given alcohol by servers at franchises of national chain restaurants.

Jill Vanheest, whose 2-year-old son was given sangria on March 31 at an Olive Garden in Lakeland, Florida, told HLN's Jane Velez-Mitchell that she's having difficulty accepting what happened.

"They poisoned my child right in front of me," Vanheest said Friday. "There aren't really words for how distrustful that makes me feel, how angry I am."

Just over a week later, on April 8, Taylor Dill-Reese said that her 15-month-old son was given alcohol during a meal -- rather than the apple juice he'd ordered -- at an Applebee's in Madison Heights, Michigan.

She said that the staff there explained that the boy got the wrong drink due to a mix-up at the bar, after containers for apple juice and margarita mix (which has tequila and triple sec) were somehow switched.

This week, Applebee's issued a statement apologizing to the parents of Dominic Wilson Jr. "for the stress and worry this caused them." It vowed to immediately retrain servers on the company's "beverage pouring policy" and change to pouring apple juice only from single-serve containers, like a juice box.

"We recognize our responsibility to constantly assess our safety policies and procedures to ensure they are rigorous and consistently followed," the Kansas-based chain said. "We believe today's strong actions make a statement to our guests of all ages around our commitment to provide a safe and enjoyable dining experience."

But Dill-Reese told Velez-Mitchell on Friday that she's not convinced.

The mother, who is 18 and was at the restaurant with her son and fiance, said she was particularly angry given that a similar incident happened before at Applebee's -- namely, a 2006 case in which a 5-year-old boy was given a Long Island iced tea, which contains rum, gin, vodka and tequila, at a New York City establishment of the national chain.

Steven Krawitz, a personal injury attorney who represented the family involved in the 2006 case, told HLN that -- whatever Applebee's and other restaurant's promises to change their policies for serving drinks to children -- a parent should never rely on a server fully when their son or daughter gets a beverage.

"The parent, unfortunately, cannot now trust what used to be a no-brainer," Krawitz said. "Restaurants are serving drinks for kids, millions of drinks, but now, given this sort of rash of ... unavoidable or unacceptable mistakes, the parents now have to test the drink."

Police were called to the Applebee's in Michigan after Dill-Reese and her fiance noticed Dominic acting strangely -- "saying 'hi' and 'bye' to the walls (and) laid his head down like he was sleepy, then woke up and got really hyper," recalled the mother.

Once a server told the parents that the boy was given margarita mix, he was rushed to the hospital, where Dill-Reese said he had a blood-alcohol limit of .10. Applebee's, though, said that Madison Heights police conducted a field test and found the drink itself only registered a .014 alcohol level.

While Dill-Reese has already filed a lawsuit against Applebee's, Vanheest said she has not decided whether to do the same against Olive Garden.

Vanheest claims that her son, Nikolai, ordered an orange juice and started drinking it. But then a waiter "came over and said there's been a mistake, grabbed the cup and kind of scurried away."

Meanwhile, her son "was not acting like himself" -- climbing in and out of his high chair and people's laps, not responding to requests to calm down, and "just getting louder and louder."

When the restaurant's staff admitted that the boy had gotten sangria, which contains wine, the child was brought to the hospital. After some struggle, he was given intravenous fluids and had his blood drawn before being checked and eventually released.

"He ended up with a lot of bruises," Vanheest said.

After the incident came to light, Olive Garden released a statement in which it called the incident "unacceptable." The chain, which is headquartered in Orlando, Florida, said "we have implemented a change in our procedures to prevent this situation from happening again" -- though it didn't detail what those changes were.

"We take the responsibility that comes with serving alcohol seriously," the statement said. "As much as we strive for perfection, this was an unfortunate case of human error."

But Vanheest, the toddler's mother, said she's not yet ready to forgive.

"Just that their disorganization allowed this ever to happen -- it's extremely frustrating," she said. "I've lost all trust and all faith in them."