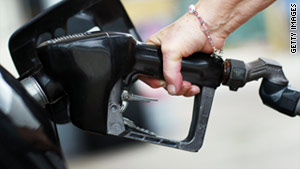 In the latest Lundberg Survey, folks paying the lowest average price were in Tucson, Arizona, at $3.41 a gallon.
STORY HIGHLIGHTS

(CNN) -- Gas prices have jumped more than 19 cents over the past three weeks, approaching the all-time high, according to a survey published Sunday.

The average price of a gallon of self-serve regular is $3.76, the Lundberg Survey found. The previous survey three weeks ago found an average of $3.57.

"This doesn't mean that we will get there," she said. "Crude oil will decide."

Where are gas prices heading?

Crude prices have been affected by the unrest in the Middle East, she said, but also by two other major underlying factors: increased demand in developing nations and the weak dollar.

"Unless crude oil relents and slips, we can expect a further rise at the pump because pump prices do not reflect all of the crude oil price hikes that have occurred," Lundberg said.