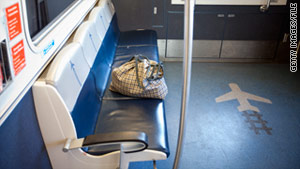 The lack of security on the AirTrain shuttle system at JFK airport has raised concerns.
STORY HIGHLIGHTS
RELATED TOPICS

New York (CNN) -- A number of security lapses in an airport shuttle system in New York is raising concerns among some Port Authority officers and state senators.

"Among the cops it's commonly referred to as a possible weapons delivery system," said one Port Authority Police official of the AirTrain shuttle system that ferries thousands of passengers to and from John F. Kennedy International Airport. The official did not want to be named because of the sensitivity of the issue.

The lack of security on the system -- an eight-mile fully automated, unmanned railroad -- was discussed Friday at a state homeland security hearing to discuss vulnerabilities that still remain 10 years after the 9/11 attacks on New York and Washington.

Police Benevolent Association Vice President Robert Morris described it simply as "a bad situation," pointing out that the airport shuttle trains enter the international arrivals building of the airport directly underneath departures where airlines such as El Al operate.

"Port Authority's own security study prior to the deployment of that system was for 18 police officers a day to police the system. Three tours of duty a day, 365 days a year," Morris told the panel. "In the last 12 months we've had 40 tours, which is about two weeks' worth of coverage with one officer."

The hearing, requested by Ball, took place following a complaint in March by the New York division of the Police Benevolent Association, a nationwide union representing police officers. The union cited a lack of security on the airport shuttle in their complaint. The Port Authority of New York and New Jersey is responsible for security at New York City airports, bridges and tunnels.

The Port Authority said in a statement Friday that there is no lapse in security.

"The way the PAPD is deployed, as well as cameras and the entirety of our security apparatus, means the traveling public should feel safe within all of the Port Authority facilities," the statement said.

Bobby Egbert, spokesman for the Port Authority Police Benevolence Association, acknowledged Saturday that the Port Authority is a huge organization with many responsibilities. When it comes to transporting people and developing commerce in the bistate region, he said the agency does a great job.

"The problem is it doesn't take public safety and security concerns seriously," he said.

According to Egbert, the biggest problem with safety on the AirTrain system is a lack of communication, noting specifically the lack of a central radio system in the new JetBlue Terminal Five.

Morris also noted the lack of an operable radio system in the terminal, saying officers instead are issued cell phones -- a slower form of communication when officers need to quickly call for backup or relay information.

While officers in the terminal do carry radios on their belts, they "might as well be carrying a brick," Morris said Friday.

Egbert pointed to the example of Steven Slater, the JetBlue flight attendant that pulled the emergency slide of a plane and ran from the airport.

"That's how he got away," said Egbert. "The two cops on duty had no idea what was going on."

While Slater's stunt didn't injure anyone, Egbert believes his escape exhibits the real safety threat to people in the airport and terminals surrounding AirTrain.

Ball's office said another hearing will be held in Albany next month to follow up on some of the concerns detailed in Friday's meeting.