CNN -- He stood 5-foot-8 and weighed 145 pounds. His face was gaunt and sunburned. Ticks, fleas and lice covered his body.

Before battle, his lips would quiver and his body went numb. When the shooting started, some of his comrades burst into maniacal laughter. Others bit the throat and ears of their enemy. And some were shattered by shells so powerful that tufts of their hair stuck to rocks and trees.

Take a tour of a Civil War battlefield today, and it's difficult to connect the terrifying experience of an average Civil War soldier -- described above from various historical accounts -- with the tranquil historic sites where we now snap pictures today.

But you don't have to tour a battlefield to understand the Civil War. Look at today's headlines. As the nation commemorates the 150th anniversary of its deadliest war this week, some historians say we're still fighting over some of the same issues that fueled the Civil War.

"There are all of these weird parallels," says Stephanie McCurry, author of "Confederate Reckoning," a new book that examines why Southerners seceded and its effect on Southern women and slaves.

"When you hear charges today that the federal government is overreaching, and the idea that the Constitution recognized us as a league of sovereign states -- these were all part of the secessionist charges in 1860," she says.

These "weird parallels" go beyond the familiar debates over what caused the war, slavery or states' rights. They extend to issues that seem to have nothing to do with the Civil War.

The shutdown of the federal government, war in Libya, the furor over the new health care law and Guantanamo Bay -- all have tentacles that reach back to the Civil War, historians say.

They point to four parallels:

The disappearance of the political center

If you think the culture wars are heated now, check out mid-19th century America. The Civil War took place during a period of pervasive piety when both North and South demonized one another with self-righteous, biblical language, one historian says.

One of the biggest debates during the Civil War was how far should governments go in dictating our lives. We still debate those politics.
--William Blair, Civil War historian

The war erupted not long after the "Second Great Awakening" sparked a national religious revival. Reform movements spread across the country. Thousands of Americans repented of their sins at frontier campfire meetings and readied themselves for the Second Coming.

They got war instead. Their moral certitude helped make it happen, says David Goldfield, author of "America Aflame," a new book that examines evangelical Christianity's impact on the war.

Goldfield says evangelical Christianity "poisoned the political process" because the American system of government depends on compromise and moderation, and evangelical religion abhors both because "how do you compromise with sin."

"By transforming political issues into moral causes, you raise the stakes of the conflict and you tend to demonize your opponents," Goldfield says.

"The erosion of the center in contemporary American politics is the most striking parallel between today and the time just before the Civil War," Goldfield says.

In the lead-up to the war, political campaigns were filled with religious fervor. Political parties paraded their piety and labeled opponents infidels.

"Today's government gridlock results, in part, from this religious mind set that many issues can be divided into good and evil and sin and salvation," he says. 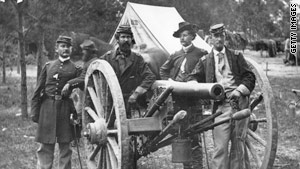 A Union artillery crew poses before battle. Each side underestimated the opposing army, historians say.

How much power should the federal government have?

Nullification, states' rights and secession. Those terms might sound like they're lifted from a Civil War history book, but they're actually making a comeback on the national stage today.

It was the kind of talk that led to the Civil War, historians say.

"One of the biggest debates during the Civil War was how far should governments go in dictating our lives. We still debate those politics," says William Blair, director of the George and Ann Richards Civil War Era Center at Pennsylvania State University.

The Southern answer to that question ignited the war. When they seceded, their leaders said that they were protecting the inherent rights of sovereign states. They invoked the 13 Colonies' fight for independence.

We wanted to be left alone. What actually caused the war was Lincoln's insistence that, no, we can't let these people go.
--H.W. Crocker III, Southern historian

H.W. Crocker III, author of "The Politically Incorrect Guide to the Civil War," says Southern secessionists were patriots reaffirming the Founding Fathers' belief that the Colonies were free and independent states.

"If the Southern states pulled out of the union today after, say, the election of Barack Obama, or some other big political issue like abortion, how many of us would think the appropriate reaction from the federal government would be to blockade Southern ports and send armies into Virginia?" Crocker asks.

He says men such as Jefferson Davis, the leader of the Confederacy, are American heroes.

"Jefferson Davis was not trying to force anything on the people in the North," he says. "We wanted to be left alone. What actually caused the war is Lincoln's insistence that no, we can't let these people go."

Slavery caused the war, says McCurry, author of "Confederate Reckoning," and most historians.

Southern slaveholders invoked the Revolution while trying to build an antidemocratic slave state "dedicated to the proposition that all men are not created equal," McCurry says.

They also didn't want to lose the tremendous wealth generated by slave labor, she says.

"They felt confident because they were the biggest producers of cotton in the Western world at the height of the Industrial Revolution."

Unleashing the dogs of war

During the run-up to the Iraq War, former Vice President Dick Cheney famously declared that American troops would be welcomed as "liberators" in Iraq.

Cheney made the mistake that political leaders have been making for ages -- he didn't know the enemy, says Emory Thomas, author of "The Dogs of War," which examines how ignorance on both sides led to the Civil War.

Civil War leaders made the same mistake, Thomas says. Northern leaders like Lincoln didn't really think ordinary Southerners who had no slaves would fight in defense of slavery. Southerners didn't think Northerners were willing to go to war to preserve the Union, he says.

And few on both sides expected the war to be so bloody and long.

"America in 1861 didn't realize what the hell they were doing," he says. "They just weren't willing to think of unpleasant possibilities."

We risk the same mistakes when we commit to "limited" military campaigns in places such as Iraq and, most recently, Libya, Thomas says.

When President Obama announced a limited air bombing campaign in Libya, Thomas thought about the political leaders before the Civil War.

Each incrementally committed to various military provocations, thinking events wouldn't spiral out of control. They were wrong.

"Once you commit to war, you don't have any control over how it ends," Thomas says. "It's amazing how that sounds like Libya now. We may blunder into success, but we don't know who these guys (Libyan rebels) are." 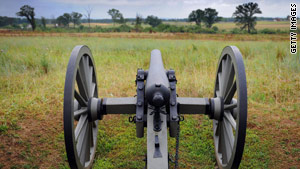 The battlefields are quiet and even tranquil today, but the average Civil War soldier faced horror and exhaustion.

The president as dictator

Barack Obama isn't the first black president, according to some Southern secessionists. That would be Abraham Lincoln. He was called a "black Republican" and the "Great Dictator."

There was a reason a large number of Americans despised Lincoln during the war. Think of the nation's recent "War on Terror." Some Americans thought Lincoln used the war to ignore the Constitution and expand the powers of the presidency.

Lincoln suspended habeas corpus (it gives a person who is jailed the right to challenge their detention in court) during the war and used military courts to arrests thousands of civilians.

"It's not just what does a president do against an enemy," says Blair, the Civil War historian. "It's what do you do against your own citizens to determine loyalty. That's a big debate today."

He says Lincoln confronted unprecedented problems: The South was in rebellion, the nation's capital was in real danger from rebels in Virginia and their sympathizers in Maryland.

At one point, a mob blocked passage of Northern troops through Maryland to defend Washington.

"His oath of office required him to 'preserve, protect and defend the Constitution' and he believed that the best way to do that was to preserve the Union," McGinty says. "What good would the Constitution be if the country itself was lost?"

McGinty doesn't think Lincoln became a dictator. He says he allowed the presidential election to take place in 1864. He worked with Congress. He asked military officers to arrest disloyal persons sparingly, and he never tolerated abuse of prisoners.

Lincoln said his actions would ultimately be subject to the review of the American people, not the courts, McGinty says.

"He called the people 'The Great Tribunal' and said that they would have the final word on constitutional issues. In the end, The Great Tribunal approved of what he had done. So, for the most part, has history."

The Great Tribunal, however, has yet to render a unanimous verdict on the Civil War.

A century-and-a-half after the war ended, people still clash over the causes and meaning.

Blair says they still clash because the war doesn't fit many Americans' image of themselves or their past.

"The American story of our past has been a hopeful, helpful narrative," he says. "But it's hard for us to understand that there was a time in this country when the Constitution protected slavery, and it was actually legal.

"How do you insert the story of slavery into that?"