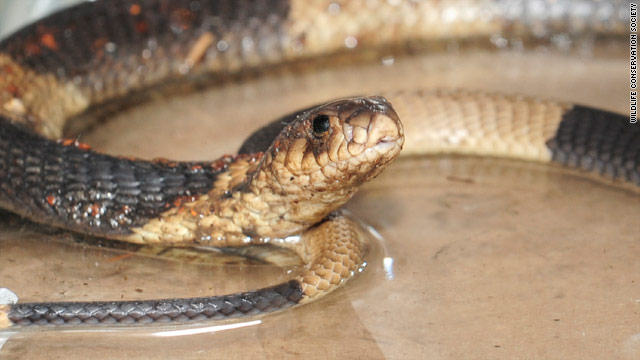 The Bronx Zoo will announce the winning name for the Egyptian cobra on Thursday.
STORY HIGHLIGHTS

New York (CNN) -- An Egyptian cobra that turned into a media darling after its escape and subsequent capture at New York's Bronx Zoo was named Mia on Thursday after a public vote.

The name is a play on the days when the snake was missing in action, zoo officials said.

The Bronx Zoo and New York Daily News asked the public to vote on the best name for the mischievous cobra. After receiving more than 34,000 suggestions, officials whittled the list down to five nominations before Mia was chosen.

The four runners-up were Subira, which means patient in Egypt, with 14,016 votes (24 percent); Amaunet, an ancient Egyptian goddess, meaning 'the female hidden one," with 11,672 votes (20 percent); Cleopatra, the last ruler of ancient Egypt who supposedly killed herself by means of an Egyptian cobra bite, with 10,730 votes (18 percent); and Agnes, Greek for pure or holy and also a reference to St. Agnes, with 6,777 votes (11 percent).

"Now that Mia has received her official name and has settled into her exhibit at the Bronx Zoo's Reptile House, the building will be re-opened to the public on Saturday, April 9 and visitors will be able to see her for the first time," the statement said.

How to catch an escaped cobra
RELATED TOPICS

But an anonymous Twitter feed on behalf of the once missing cobra appeared defiant.

"So, the vote is in. They want to name me Mia," the posting said. "But in my heart I'll always know that my true name is Mrs. Justin Bieber."

The 3-ounce, 20-inch reptile slithered out of her enclosure on March 26 and turned up five days later after zoo officials scattered rodent-scented wood shavings to lure her out in hopes of a meal.

Zoo officials don't know how the snake got out, director Jim Breheny said this week.

"Anyone who has ever dealt with snakes or kept snakes knows that they are notorious as escape artists," Breheny said Monday.

The disappearance of an animal whose venom can kill an elephant in three hours and a human in 15 minutes sparked more amusement than panic, drawing 200,000 followers to an anonymously authored Twitter feed. It had the snake taking tours of the city and threatening to drop down the chimneys of unsuspecting city dwellers.

All the attention has brought plenty of notice to the zoo, Breheny said with a laugh.

"It certainly has put us out there," he said. "But we would have preferred to be out there for another reason."