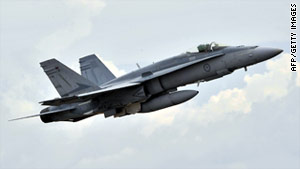 An F/A-18 such as this one crashed in California during a training flight Wednesday.
STORY HIGHLIGHTS
RELATED TOPICS

Capt. James Knapp, commanding officer of the station, told reporters the plane, assigned to Strike Fighter Squadron 122, crashed at 12:08 p.m. PT (3:08 p.m. ET) in a private farm field about one half mile west of the property line.

The crash of the two-seat strike fighter, which occurred southwest of Fresno, is under investigation, Knapp said.

The names of the Super Hornet crew, a pilot and weapons system operator, were being withheld pending notification of next of kin.

"I ask that you have your thoughts and prayers for the families, friends and shipmates of these two fine Naval officers," Knapp said. "That you remember they represent the very best of this nation."

An active-duty mechanic not authorized to speak on behalf of the Navy told CNN he witnessed the incident.

He heard the jet flying and suddenly "it got really quiet," he said. The F/A-18F pilot apparently tried to bank left and pull up when the plane crashed into a field, he said. "We didn't see any seats punch out."

The F/A-18 Hornet, an all-weather aircraft, is used as an attack aircraft as well as a fighter, according to the Navy.

The U.S. Navy flew EA-18 Growlers, which are special versions of the F/A-18 fighter designed to jam enemy electronic signals, in the early phase of the no-fly-zone operation imposed upon the Libyan military of Col. Moammar Gadhafi, according to the Navy.

CNN's Larry Shaughnessy and Phil Gast contributed to this report.