NFL lockout gets its day in court 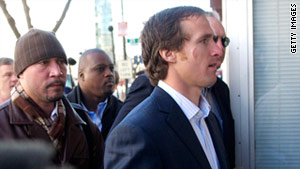 New Orleans Saints' quarterback Drew Brees is one of 10 current and prospective NFL players who are seeking an injunction against the NFL lockout.
STORY HIGHLIGHTS

St. Paul, Minnesota (CNN) -- A federal judge will hear arguments on Wednesday from lawyers representing current and former NFL players who want the league to lift its lockout and this year's football season to proceed.

Judge Susan Richard Nelson will consider whether to grant a preliminary injunction that would lift the lockout, the result of an ongoing dispute between the NFL owners and the players who have failed to reach an collective bargaining agreement.

It's possible that Nelson will make a decision after Wednesday's hearing at U.S. District Court in St. Paul, Minnesota. If she rules in favor of a preliminary injunction, the NFL is likely to appeal. If she rejects the players' motion, the lockout will continue.

Tom Brady, Drew Brees, Peyton Manning, and seven other players have filed a lawsuit on behalf of other current and eligible NFL players against the league to halt the lockout, which could affect the start of the 2011-12 season scheduled for September 8.

On Monday, the federal judge agreed to combine Brady v. National Football League with another class action lawsuit, Eller v. NFL, filed in late March by a group primarily made up of retired NFL players.

That second lawsuit is "potentially more threatening" because the plaintiffs in Eller v. NFL are not bargaining members of the NFL's players union (NFLPA) and the NFL cannot argue that they engaged in bad faith during collective bargaining discussions, according to SI.com's legal analyst Michael McCann.

"The NFLPA may be removed from the picture in Eller v. NFL, a point which would take away a key defense the NFL enjoys in Brady v. NFL," McCann explained.

Last month, negotiations between the NFL and NFLPA aimed at preventing a work stoppage broke down. The players union decertified itself. By giving up their collective bargain rights, the players could file individual anti-trust suits against the league and the owners. That move set the stage for a lengthy legal battle with owners.

"Teams might (pick) based on needs rather than the best players available, because who knows when they'll be able to address those needs on the free-agent market," Politi explained.

It is possible for the NFL season to go forward with replacement players -- but analyst Michael McCann says that is not likely:

"Practical and legal hurdles would make doing so extremely unlikely," he explained.

"The NFL might argue that if NFL players won't accept the league's best CBA (collective bargaining agreement) offer, the league has no choice but to resume games with other players who are willing to play," he added.

CNN's Tricia Escobedo reported from Atlanta and Chris Welch reported from St. Paul. Steve Politi, a sports columnist for The Star-Ledger in Newark, New Jersey, contributed to this report.