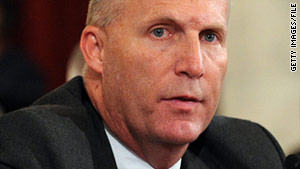 (CNN) -- Top executives of the company that owned the Deepwater Horizon oil rig announced Tuesday they will donate their safety bonuses to the families of the 11 workers killed in the April 2010 explosion in the Gulf of Mexico.

The announcement follows criticism of a Transocean Ltd. financial filing that claimed 2010 was its "best year" in safety.

"The executive team made this decision because we believe it is the right thing to do," Chief Executive Officer Steven Newman said in a statement Tuesday. "Nothing is more important to Transocean than our people, and it was never our intent to diminish the effect the Macondo tragedy has had on those who lost loved ones," he said. "We offer our most sincere apologies and we regret the impact this matter has had on the entire Transocean family."

The five executives will donate more than $250,000 to the Deepwater Horizon Memorial Fund, which Transocean established. The fund has distributed more than $1.6 million to the 11 families.

Transocean Ltd., in a recent filing with the U.S. Securities and Exchange Commission, said hefty bonuses and raises to top executives were based in part on the company's "performance under safety" last year.

"Notwithstanding the tragic loss of life in the Gulf of Mexico, we achieved an exemplary statistical safety record as measured by our total recordable incident rate and total potential severity rate," the SEC statement reads. "As measured by these standards, we recorded the best year in safety performance in our company's history."

Safety accounted for 25% of the performance measures that determined the 2010 bonus plan, the proxy form stated.

Transocean tried to clear the water first with an apology Monday.

"We acknowledge that some of the wording in our 2010 proxy statement may have been insensitive in light of the incident that claimed the lives of eleven exceptional men last year and we deeply regret any pain that it may have caused," Transocean said in a statement to CNN. "Nothing in the proxy was intended to minimize this tragedy or diminish the impact it has had on those who lost loved ones. Everyone at Transocean continues to mourn the loss of these friends and colleagues."

The April 20, 2010, explosion on the Deepwater Horizon rig, which was leased to BP, injured 17 workers and killed 11 others, including nine Transocean employees, according to the SEC filing. It has been called the worst spill in U.S. history. The well was capped three months later, but not before millions of barrels of oil spilled into the Gulf.