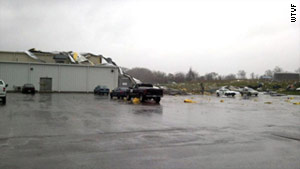 About 184 employees were inside a manufacturing plant when the storm arrived shortly after 1 p.m., police say.
STORY HIGHLIGHTS
RELATED TOPICS

(CNN) -- A tornado zeroed in Monday afternoon on a manufacturing plant in southwestern Kentucky, tossing pieces of the roof, collapsing part of the aluminum structure and injuring seven people, officials said.

Tornado watches were in effect Monday night in portions of Louisiana, Mississippi, northwestern Florida, most of Alabama and northern Georgia, including Atlanta. Severe thunderstorms were moving through and flood warnings were issued in some areas.

About 184 employees were inside TGASK, a plant that makes automotive parts, when the storm arrived shortly after 1 p.m., said Paul Ray, spokesman for the Hopkinsville Police Department.

None of the injured had life-threatening injuries, said spokeswoman Jessica Beckham of Jennie Stuart Medical Center. Ray said the injuries were mostly bumps and bruises.

The manufacturing plant is between Hopkinsville and Pembroke.

"It could have been a lot worse," Ray told CNN. The plant was "very fortunate that at that time, there were very few injuries, and only minor injuries." All employees had been accounted for, he added.

The Kentucky Division of Emergency Management said possible tornadoes struck near La Center in Ballard County, with injuries being reported.

One injury was reported from a storm that hit a mobile home park in Greenville, Kentucky, said Police Chief Darren Harvey.

A likely tornado touched down two miles south of Georgetown in Grant Parish, Louisiana, on Monday afternoon, the Grant Parish Sheriff's Office said. There were reports of widespread damage in the community of Selma.

Numerous trees and power lines were down across the area, the Sheriff's Office said.

More than 58,000 customers were without power in Tennessee, according to Nashville Electric Service.

Storms also struck Humphreys County in Tennessee, about 60 miles west of Nashville, according to authorities.

Although no injuries were reported, trees, power lines, roofs and structures were down, Frazier told CNN.

A dispatcher said a communications tower was down in Humphreys County, but workers were still able to send and receive messages.