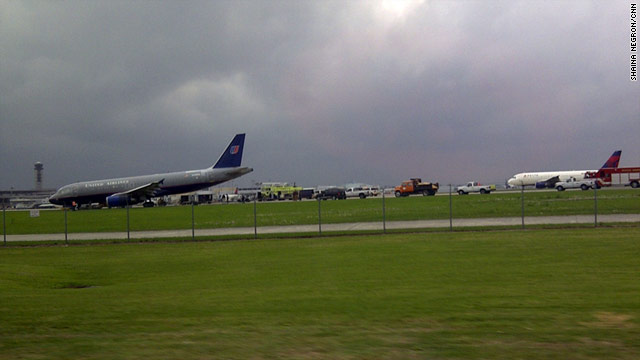 Read more about this story from CNN affiliate WVUE.

Michelle Wilcut said one runway remained closed as workers filled a deep hole in the nearby sod, but airport officials hoped the labor would be completed in time to reopen the runway later Monday night.

The National Transportation Safety Board said the pilot lost braking and steering control during the landing. The hole in the ground formed when the plane's nose gear burrowed into the sod, Wilcut said.

No one was injured in the incident, according to FAA spokesman Lynn Lunsford.

The Airbus A-320, flying as United Flight 497 from New Orleans to San Francisco, was smoking from the nose and made a screeching sound as it landed, a witness told CNN affiliate WVUE in New Orleans.

The flight was carrying 100 passengers and five crew members, according to United. However, the NTSB said 109 people were on board.

The aircraft had returned to the airport about 20 minutes after take-off due to electrical difficulties and smoke in the cockpit, the NTSB said. Airline spokesman Rahsaan Johnson said the airplane experienced an issue with flight instruments.

The pilot had asked to land on a longer runway but was diverted to a shorter one because of workers on the first runway, Lunsford said.