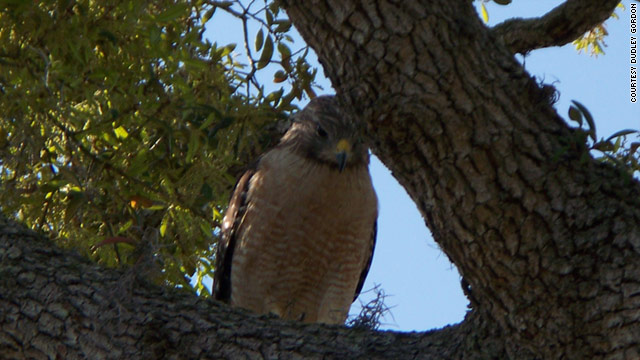 The Melbourne, Florida, resident thought he was going to be relieved Friday of a red-shouldered hawk that had been divebombing him and his neighbors while protecting a brood of eggs in a tree in Gordon's yard.

"It's not gonna happen today. With any luck, tomorrow," a rueful Gordon said Saturday.

"I had figured they would be hatching soon due to the behavior of the mother," Dean said, based on Gordon's descriptions.

The original plan was to scare off the adult birds with pyrotechnics, grab the eggs and take them to the Brevard County Zoo to be incubated. Now Dean says he hopes to catch the parents in nets and have them relocated, while handing the chicks over to the Audubon Center for Birds of Prey in Maitland, Florida.

Audubon Society representatives could not be reached for comment.

James said he would remove the nest from the tree and donate it to the zoo for an educational exhibit.

The overly protective male hawk has sunk its talons into Gordon's scalp three times and has attacked his neighbors, as well. On Saturday morning while Gordon, Dean and a neighbor were standing on the lawn contemplating their next move, the bird landed just 15 feet from them, Gordon said.

There's something about birds and military officers in Florida. Dean said two years ago he had to get rid of vultures that were harassing military brass trying to enter a Northrop Grumman Aerospace facility in Melbourne, 25 miles south of Cape Canaveral.

He didn't say whether any of the officers were full-bird colonels.