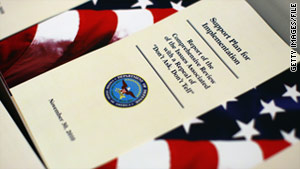 A copy of a "don't ask, don't tell" study shown at a Pentagon briefing in November in Arlington, Virginia.
STORY HIGHLIGHTS

(CNN) -- Gay rights advocates claimed victory Saturday after an administrative panel in California this week recommended not to discharge an openly homosexual sailor.

Although legislation to repeal "don't ask, don't tell" was signed into law late last year, it has not been put into effect. But the panel's vote is believed to be the first case in which the military chose not to enforce the controversial policy, according to a gay rights organization.

Petty Officer 2nd Class Derek Morado, 26, was facing military discharge after a comrade reported that he saw photos posted of the gay serviceman on Myspace kissing another man.

"I'm relieved it's over and I'm glad I get to continue serving," Morado told CNN on Saturday. "I've had plenty of time for the news to digest, but I'm still so relieved. I just want to continue doing what I have been doing [in the military]."

"This is the first hearing that's resulted in a retention where the discharge is not continued," said Robin McGehee, director of Get Equal, a gay rights group that publicized Morado's case.

President Obama signed the "don't ask" repeal into law just before Christmas. But administration officials have said the actual policy change won't take effect until most training is completed throughout the military. Also, Obama, Defense Secretary Robert Gates and Joint Chiefs Chairman Adm. Mike Mullen must certify that the ranks are properly prepared and that readiness, recruitment and retention won't suffer.

In California on Thursday, a three-person panel at Lemoore Naval Air Station voted unanimously that the Navy not discharge Morado, the sailor said.

Morado, stationed near Fresno, California, said he was packing his bags and transferring to San Diego on Monday. "The timing just happened to hit while the case was going on."

Morado said his duties at his new location won't change.

Calls Saturday to the Navy and Department of Defense were not returned. But a Pentagon spokeswoman in an e-mail to CNN reiterated the military's stance on openly gay service members.

"The law commonly known as "Don't Ask, Don't Tell" remains in effect until 60 days following certification by the Secretary of Defense, Chairman of the Joint Chiefs of Staff, and President," Pentagon spokeswoman Eileen Lainez said.

But to McGehee and gay rights advocates who championed his cause, Morado's case proves that "don't ask, don't tell" may finally be over.

"Our hope is that this sets a precedent that we won't lose another soldier [to DADT] and we'll stop wasting taxpayers' dollars on this sort of thing and concentrate on more important matters of our military," McGehee said.

On Friday, a top Pentagon official said the repeal would be ready for implementation by midsummer.

Clifford Stanley, the Pentagon's undersecretary for personnel and readiness, told members of a House Armed Services subcommittee that the process will not be rushed "because we want to make sure that it's done right."

But "at the same time, we don't want to take forever to do it," he said.

Morado's case now goes to the Navy Personnel Command for procedural review, according to the Fresno Bee newspaper.