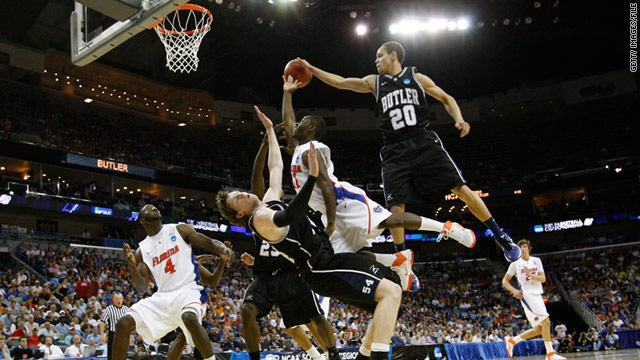 The Butler Bulldogs, a No. 8 seed, stuffed the No.2-seeded Florida Gators' chance at a championship last weekend.
STORY HIGHLIGHTS

Cinderella is a commoner, the story goes, abused and ridiculed by her stepmom and stepsisters on the eve of the royal ball. If not for the unlikely confluence of magic and mice, she has no hope of meeting Prince Charming.

In the world of college hoops, you can supplant wicked stepmom with media, evil stepsisters with perennial basketball powerhouses, royal ball with NCAA tournament and Prince Charming with winning the whole shebang.

If we're pushing the metaphor, you can also replace mice and magic with suffocating defense and lights-out 3-point shooting.

But when is the metaphor misplaced? Ever? Can a team shake the consummate underdog label? How?

With Butler and Virginia Commonwealth -- neither a stranger to toppling bigs -- on tap this weekend, I began researching Cinderella's origin. I learned the story dates to ninth-century China and the term appears to have been popularized in "Caddyshack" when groundskeeper Carl Spackler (aptly played by Bill Murray) dreams of one day playing in the Masters.

After an hour of suffering the internet's woefully unhelpful answers, I picked up the phone and called Michael Litos, a marketing consultant and freelance sportswriter but, more importantly, the author of "Cinderella: The Rise of the Mid-Major."

Litos told me he doesn't like the term Cinderella, or the term mid-major -- used to describe teams not aligned with one of the major conferences -- but he realizes why we need them. By we, he means the media.

"I can see the metaphor and I'm fine with it," he said. "The media need them to kind of put things into boxes. ... What I hope we get past is people being surprised when mid-major teams win ballgames."

I took no offense because ... well, he's right. With Vegas estimating that 100 million people filled out brackets this year, wagering a collective $3 billion on legal and illegal soothsaying, the media are guaranteed a captive audience.

At least until VCU or Butler came along and decimated the country's brackets.

Before going back to Litos, let me offer a disclaimer: Litos is a Ram, a VCU alumnus. He remembers when his boys toppled Duke in the 2007 tourney. He cringed when ESPN's Hubert Davis said VCU didn't belong in this year's showdown, and he probably smirked when the network's like-minded Jay Bilas tweeted, "Crow: actually, it tastes like chicken."

Litos is also a Colonial Athletic Association buff, so he knows mid-majors. The CAA has produced two of the most compelling Cinderella stories in the last half decade if you count George Mason scrapping its way to a Final Four in 2006.

"That's my point, I guess, about the whole Cinderella thing: When they get the chance, they're winning these basketball games," Litos said.

So when does the moniker no longer apply? Do we still consider Gonzaga a Cinderella after it's made every tournament since 1999?

Tournament Resumes
A look at each Final Four team's performance in the NCAA Tournament:

Butler Bulldogs
This is the Bulldog's second-ever Final Four berth.

Kentucky Wildcats
The Wildcats have seven NCAA championships since 1948. This is their 14th Final Four berth.

UConn Huskies
The Huskies have two national championships, in 1999 and 2004. This is their fourth Final Four berth.

VCU Rams
This is the Rams' 10th tourney appearance and the first time they have advanced past the Round of 32.

Though you could argue VCU still needs to do some resume building, Butler seems to have earned its cred. So what about the Bulldogs? After consecutive Final Four appearances and four Sweet 16s in the last seven years, is Butler still a Cinderella?

Litos said he believes Gonzaga has fairly shed the title. Cinderellas typically have minuscule basketball budgets (at least compared with the likes of Duke and Kansas); they don't often play on television; they come from conferences that usually lend only one team to the NCAA tournament's field of 64; and they rarely play powerhouses, and then, never at home.

"Gonzaga just wins," he explained. "There's a formula in there somewhere. There's just a cycle of success, and it starts with winning basketball games."

Which is exactly what Butler has done in the last two NCAA tournaments, and Litos believes it'll be next to shake off the yoke of underdoggery.

"Butler's probably on that precipice now," he said. "I have a hard time believing that mid-major or Cinderella apply."

Interesting stuff, this, but I know you're thinking it's worthless if I don't tell you how to harness the information for next year's office pool.

As this year's CNN.com pool winner (yes, it's already over; we're that bad), I'd love to give you some insight. Here goes: I got lucky as hell with my Richmond and Butler picks.

Lacking any thoughts more useful than that, I picked up the phone again -- this time for a chat with Ken Pomeroy. The Utah-based meteorologist developed "tempo statistics," which have earned him respect among many a college basketball coach and analyst, Duke's Mike Krzyzewski and Butler's Brad Stevens among them. He's also a consultant to the Baylor basketball squad.

Read why it's easy to hate Duke

His site, kenpom.com, focuses less on percentages than it does the pace of the game. Rather than looking at shooting percentage over an entire game or season, for example, he explores play-by-play data and considers how the pace of a game can affect scoring opportunities.

Surely, I thought, this master of the quantifiable could give us some pointers on how to determine which underdogs are worth scribbling into our brackets.

He flatly stated the opposite: "You're not going to be able to predict the success of an underdog."

Pomeroy, for one, is not ready to relieve Butler of its underdog status. He'd like to see more than two stellar performances before making that assessment, he said. As for the VCU Rams, he's not sure their success is totally their doing.

"Not to take away anything from what they've done, but teams like Purdue and Kansas played pretty bad games against them," he said. "How much of it was just Kansas laying an egg? I don't know how you figure that one out."

That's my point, I guess, about the whole Cinderella thing: When they get the chance, they're winning these basketball games.
--Michael Litos, author
RELATED TOPICS

iReport.com: Who do you think will win it all?

Pomeroy told me that, on paper, Kentucky and Butler should meet in the NCAA Final, then, in the next breath, said predictions are silly.

But they're fun, and let's be honest, the first two rounds of the tournament wouldn't be as tantalizing without the Cinderellas.

They're the reason such a ludicrous percentage of the adult population scrambles to enter pools with friends and co-workers, the reason we monitor scores on our smartphones or head to lunch at the sports bar come tourney time.

They're also the reason that dilettantes who pick the winners by team color or mascot ferocity have the same chance as Litos or Pomeroy of winning a pool.

The talent gaps between teams, especially in the later rounds, aren't all that disparate so success hinges more on intangibles such as hot streaks and moxie.

Picking the winners is essentially a matter of luck and perhaps, as the mice sang, a little "Bibbidi-Bobbidi-Boo."