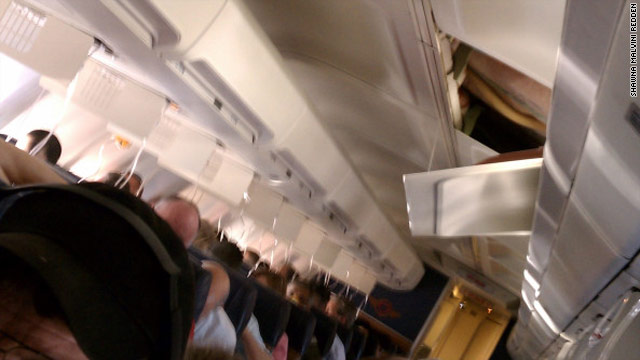 A passenger captured this image from inside the cabin of Southwest Flight 812 during the incident Friday.
STORY HIGHLIGHTS

Are you there? Share your story and images on CNN iReport.
See more from CNN affiliate KOVR.

(CNN) -- A Southwest Airlines flight landed safely at a military base in Yuma, Arizona, on Friday with what passengers described as a 3-foot hole in the fuselage of the Boeing 737.

"I heard a loud popping sound about three or four minutes before it blew open on us," passenger Greg Hansen told CNN.

"(Then) a big explosion happened. A big noise, and from there, you felt some of the air being sucked out. It happened right behind me, in the row behind me and it covers about two and a half rows," he said from seat 11C.

Hansen, 41, a regional sales manager for a biotech company, was flying home to Sacramento from a business trip. Some people panicked and screamed as the blue sky and sun began to shine through the cabin in mid-flight, he said.

But just behind him, Hansen says he could see the jagged edge of the aircraft where the rivets used to be.

Hansen said that he and the rest of the passengers were still on board Southwest Flight 812, after making an emergency landing at Yuma Marine Corps Air Station/International Airport at 7:07 p.m. ET.

The FAA said the captain made a rapid controlled descent from 36,000 to about 11,000 feet after the cabin lost pressure. Investigators are en route to the base, the FAA said.

Southwest said in a statement that the flight crew "discovered a hole in the top of the aircraft."

A new aircraft is en route to the base with maintenance, ground crew and customer service agents "to assess the damaged aircraft and support the 118 customers aboard."

Southwest Airlines said only one injury is being reported.

"There are no reported customer injuries," reads a statement released by the airline. "One of the flight attendants, however, received a minor injury upon descent."

Hansen said one male flight attendant appeared to fall, and was bleeding from a facial injury.

An airport official told CNN that passengers will remain on board the damaged plane to ensure their safety, until the new replacement plane arrives.

"They have been tended to and are being given refreshments because the temperature on the tarmac is near 100 degrees," said Yuma International Airport spokeswoman Gen Grosse.

One of the passengers told CNN affiliate KOVR that the incident occurred shortly after flight attendants took drink orders.

"I heard a huge sound and oxygen masks came down and we started making a rapid decent. They said we'd be making an emergency landing," said the passenger, identified only as Cindy. "There was a hole in the fuselage about 3 feet long. You could see the insulation and the wiring. You could see a tear the length of one of the ceiling panels."

A spokeswoman for Boeing declined to comment on possible causes of the incident.

"The 737 has an outstanding safety record," said Julie O'Donnell. "We are in communication with the (National Transportation Safety Board) and stand ready to assist."

CNN's John Branch and Rich Phillips contributed to this report