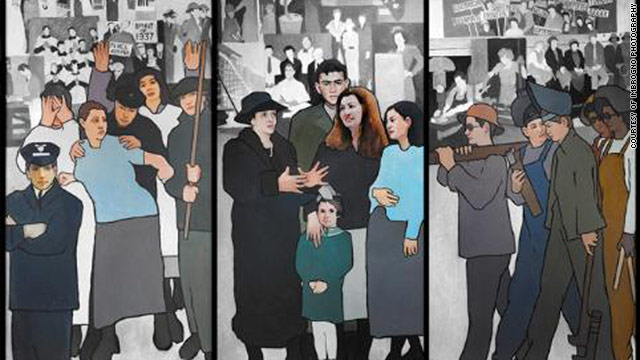 The 36-foot-long, 11-panel mural has been put in storage while "a more appropriate venue" is found for it.
STORY HIGHLIGHTS
RELATED TOPICS

(CNN) -- Maine GOP Gov. Paul LePage followed through with his decision to remove a mural depicting the history of the workers' movement from the state's labor department lobby, a spokeswoman said Monday.

"The mural has been removed and is in storage awaiting relocation to a more appropriate venue," said LePage press secretary Adrienne Bennett in a prepared statement. "We understand that not everyone agrees with this decision, but the Maine Department of Labor has to be focused on the job at hand."

The controversy over the 36-foot-long, 11-panel mural erupted last week when a LePage administration official announced that the artwork would be removed and that conference rooms dedicated to American labor movement icons would be renamed.

Administration officials said the change was needed to reflect a new image for the department, one not tilted toward organized labor. They said visitors to the lobby had complained that the mural is anti-business.

Maine AFL-CIO president Don Berry called it "a spiteful, mean-spirited move by the governor that does nothing to create jobs or improve the Maine economy."

Last week, acting Maine Labor Commissioner Laura Boyett announced a contest to replace the names affixed to the conference rooms. The names to be replaced include Cesar Chavez and Frances Perkins.

Bennett has said the Maine Arts Commission is helping find a new site for the mural.