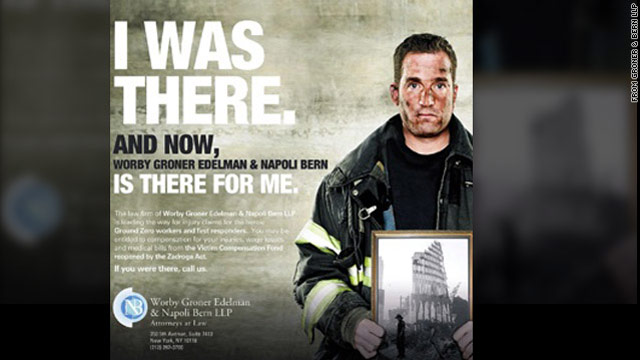 New York (CNN) -- A controversial 9/11 ad with an altered picture of a model firefighter holding a picture of the aftermath of the World Trade Center attack under the headline "I was there" will not be running again, according to the ad agency responsible for the ad.

"The intent of the ad is a positive one," Barker said. "The ad was designed to tell people that there are funds available for people that were injured at ground zero."

Keiley signed a release when the stock photograph was taken in November, and there were no restrictions about altering the photo, according to Baker. He said the agency did not know who Keiley was.

"At no time did we have any idea -- or could we have had any knowledge -- that the person in the photo, Robert Keiley, was an actual firefighter, much less a New York City firefighter. This unfortunate coincidence makes the ad into something we never intended it to be," he said.

"We feel absolutely terrible that there's this unfortunate incident that (Keiley) is a firefighter, that he actually had friends that were lost on 9/11," Barker said. "We deeply apologize to Mr. Keiley and deeply regret any offense to anyone."

In a later statement, Barker said, "We hold all firefighters in the highest regard, and believe all New York City firefighters are heroes. While our mistake was entirely inadvertent, we understand why the ad has caused hurt, we regret its use, and we accept responsibility. Our client was uninvolved in the selection of this photo and had no knowledge of any of these details. Out of respect for all parties involved, Barker/DZP has voluntarily withdrawn from this assignment."

Keiley's attorney, Keith Sullivan, said, "My client is opposed to the commercialization of 9/11 and is extremely upset that his image is being used for commercial gains by others."

Sullivan said that Keiley was holding a helmet in the original photo.

"I think the onus is on the ad company because they need to try to practice on being more sensitive," said John Feal, president of the nonprofit organization FealGood Foundation, which aims to spread awareness and educate people about the health effects of 9/11 responders. Depictions of the 2001 attacks are "so sensitive in the 9/11 community," he said.

Keiley and Worby Groner Edelman & Napoli Bern were not available for comment.