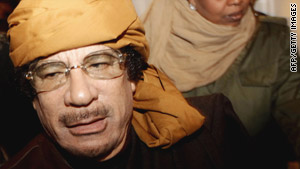 (CNN) -- U.S. intelligence sees signs that some of those who are "relatively close to the Libyan leader are questioning whether he has staying power," a U.S. official says.

In addition, the official said, Libyan rebels have made significant gains against Moammar Gadhafi's forces, and American intelligence has seen indications that the "morale of Gadhafi forces is on the decline."

One factor is the recent success of the rebels, but international actions and the isolation of Libya make up another important element.

The official acknowledged that it is unlikely the rebel fighters have the skills and ability to go much farther west to areas dominated by Gadhafi forces and supporters. However, the official said, "political dynamics are just as important as the military state of play" in Libya.

In a region "where perceptions become reality," the official said, the perception that rebel advances "are isolating or creating a ring around Gadhafi" could lead to the realization by certain officials that the continued pressure will create a political problem for Gadhafi.

"Some of his advisers will then tell Gadhafi it is time to go," suggested the official.

The official's statements followed comments over the weekend by Secretary of State Hillary Clinton, who said on NBC's "Meet the Press" that those around Gadhafi are reaching out to say, "You're misunderstanding us. You don't appreciate what we're doing. Come and talk to us."

"One should not underestimate the possibility of the regime itself cracking," Secretary of Defense Robert Gates said Sunday on NBC.