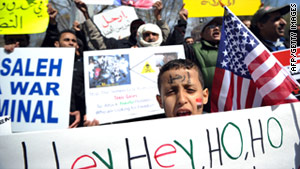 Washington (CNN) -- Groups cheering for or against the ongoing unrest in four Middle Eastern countries took to the streets outside the White House on Saturday.

The demonstrations were organized by separate groups but took place concurrently, with each group taking up space on the street and peacefully speaking out about events in Libya, Bahrain, Syria and Yemen.

"I'm here to try and end the regime in Yemen, the corruption," insurance agent Sameer Twaiti told CNN. A Yemeni who has lived in the United States since he was three, he added that the president "had 33 years. That's more than enough. It's not a democratic country. A democratic country should be four to eight years max."

Yemeni protesters tore photographs of embattled President Ali Abdullah Saleh and proceeded to stomp on the tattered remains in scenes reminiscent of Iraqis defacing images of Saddam Hussein after he was deposed in 2003.

A group of about two dozen people were protesting against the ongoing unrest in Bahrain but claimed not to take sides. The majority were Bahrainis, but there were a few from other countries in the Persian Gulf region.

"We don't want the violence, we want the violence to stop. We come here to show the people that there are people that want peace," Salman, a Bahraini student at Valley Forge Military Academy and College in Wayne, Pa., told CNN. "If you want to go protesting in Bahrain, you can do that peacefully. Do not kill, do not stab, do not hurt people if you want your word to spread."

Salman declined to give his surname, saying it was to emphasize unity of the purpose and less on the family name. Another protester carried a sign in Arabic that called on Iran and Hezbollah to mind their own business. According to State Department cables published by WikiLeaks, Bahraini government officials often accuse Iran or Hezbollah of meddling in its domestic political affairs, although they have not provided U.S. officials with any evidence backing up their assertions.

A group of Syrians was calling on the government of President Bashar Assad to listen to dissident demands for reform.

"We keep hearing things from the government that they're going to take care of the current situation. I think they need to admit that there's a problem, instead of trying to blame it on external forces," Khalid Saleh told CNN.

"I think we have an internal problem in the system. It's as simple as stopping the killing of innocent people, and actually listening to civilians and their demands."

Saleh, who owns a marketing company and traveled from Michigan to attend the protest, says he doesn't find it likely that the current president will react the way his father handled the Muslim Brotherhood-led insurgency in Hama in 1982, wherein the Syrian government used chemical weapons and thousands of people were killed.

"I don't think it will get as bad as that. In the '80s, there was not the communication that you have now. The world's eyes are looking, everybody is watching what happens in Syria, so I don't think it's the same thing that's going to happen. The president is educated in England, I expect him to act differently this time to the demands of the people."

A smaller group of about a dozen protesters from the liberal group ANSWER also stood outside the White House to protest the ongoing military campaign in Libya led by the United States, Britain and France.