Did one woman's pot go up in smoke? 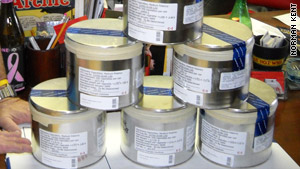 The prescription is part of a federal program called Compassionate Use Protocol, developed in the 1980s.

(CNN) -- Elvy Musikka, 71, of Eugene, Oregon, says the post office lost something that could cost her more than just a buzz. She could lose her eyesight.

Six metal tins packed with medical marijuana joints --1,800 in all -- are in transit somewhere with her name on it. That's enough for up to 10 potent smokes a day for six months.

It's a prescription she receives twice a year to treat her glaucoma.

"I just don't know what to do," Musikka said.

Musikka says she's one of four remaining patients getting pot for free as part of a federal government program called Compassionate Use Protocol, developed in the 1980s.

Her attorney says the cannabis is grown in a government lab at the University of Mississippi.

"It relaxes the eye so whatever excess fluid can get through, " Mussika said.

She usually flies back to Miami, her former home, to pick up the pot from her eye specialist at the Bascom Palmer Eye Institute. But this time, the medicine was delayed, and she had to fly home without it.

Her attorney, Norman Kent of Fort Lauderdale, Florida, accepted the pot for her and shipped it as next-day delivery through the U.S. Postal Service on March 17.

He discovered he mislabeled the ZIP code. It was off by one digit and the shipment was sent to the post office in Santa Monica, California, about 850 miles away from Eugene, Oregon.

"I called consumer affairs' lost and found, the complaint and tracking departments, and everyone says that they're looking," Kent said.

As each day goes by and it doesn't show up, I just get more confused. It's just very exasperating.
--Elvy Mussika, 71, medical marijuana user
RELATED TOPICS

Now, more than a week after the packages were mailed, there has yet to be a whiff of the missing cartons.

"I find it fascinating that the post office can tell me because of their tracking that it was misrouted and can acknowledge that it went to the wrong place, but they can't tell me what happened to it after that," Kent told CNN. "It's astounding."

Kent said the contents are not marked on the outside of the cartons. Inside, he included letters explaining why the rolled joints are stacked within the shiny metal tins.

"As each day goes by and it doesn't show up, I just get more confused. It's just very exasperating," Musikka said.

Musikka has her own website and sometimes lectures on the medical need for marijuana.

After spending hours on the phone with the postal service, Kent sent a letter to the U.S. Drug Enforcement Administration on Thursday asking for help.

In the letter, he wrote that he hopes "the DEA recognizes it is not in the public interest to have marijuana missing in the U.S. mails," and adds the need to "make a record of this loss in order to procure a new prescription."

Contacted by CNN, a U.S. Postal Service spokesman said the agency is looking for the lost shipment.

"She's not asking for much," Kent said. "Just her marijuana."