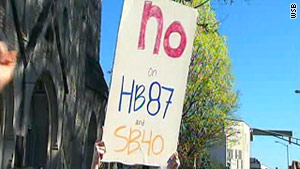 Atlanta (CNN) -- Two groups against a tough immigration law now before the Georgia legislature say thousands will show up at the state capitol in Atlanta Thursday to protest it.

"Thousands of Georgia immigrants and allies are coming together to say no more to racial profiling and no more to the dangerous and unfair targeting of immigrant communities and communities of color," said Adelina Nicholls, director of the Georgia Immigrant and Refugee Rights Coalition (GLAHR). "It makes no sense that Governor (Nathan) Deal seems intent on supporting legislation that will bankrupt the state -- both morally and financially. We call on him to veto such misguided policy."

In addition to GLAHR, the event is being organized by the Georgia Association of Latino Elected Officials (GALEO). The folk duo the Indigo Girls, supporters of immigrant rights, will perform.

The bill would turn the state into a "'show me your papers' state," a statement from GALEO said. Opponents say the measure would encourage racial profiling, create second class citizens and would harm the state's economy, particularly the agricultural industry.

The proposed law, known as House Bill 87, has already cleared the Georgia House and is under consideration by the state Senate. Under the measure, Georgia companies would be required to use a federal database called E-Verify to check the documentation of current and prospective employees. That database was created by Congress as a voluntary, discretionary resource.

The bill also criminalizes the transportation of illegal immigrants and allows law enforcement officials to check the legal status of people in custody in certain situations.

The Georgia bill is similar to legislation submitted in South Carolina and Alabama, inspired by Arizona immigration measures that advocates claim will significantly curtail illegal immigration.

Arizona's law requires immigrants to carry their alien registration documents at all times and requires police to question people if there's reason to suspect they're in the United States illegally. It also targets those who hire illegal immigrant laborers or knowingly transport them.

The Obama administration filed a lawsuit to block parts of the controversial law. That prompted Gov. Jan Brewer to sue the federal government for what she called Washington's failure to secure the state's border and enforce immigration laws.