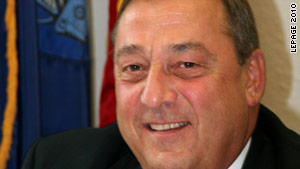 (CNN) -- A plan by Maine GOP Governor Paul LePage to remove a mural depicting the history of the workers movement from the state's labor department lobby and to rename conference rooms dedicated to union icons was met with outrage Wednesday from leaders of organized labor in that state.

"It's a spiteful, mean-spirited move by the governor that does nothing to create jobs or improve the Maine economy," said Maine AFL-CIO President Don Berry.

At issue is a 36-foot-long, 11-panel mural in the Maine Labor Department lobby that includes depictions of working children, Rosie the Riveter, a Depression-era strike at a shoe factory and workers casting ballots, among other scenes. Also at issue are such names as Cesar Chavez and Frances Perkins, which are affixed to conference rooms in the building.

LePage, according to administration officials, decided to remove the mural and rename the conference rooms after visitors complained that they were anti-business.

"We have received feedback that the administration building is not perceived as equally receptive to both businesses and workers -- primarily because of the nature of the mural in the lobby and the names of our conference rooms," wrote acting Maine Labor Commissioner Laura Boyett in a department memo on Tuesday.

"Whether or not the perception is valid is not really at issue and therefore, not open to debate," she wrote. "If either of our two constituencies perceives that they are not welcome in our administration building, and this translates to a belief that their needs will not be heard or met by this department, then it presents a barrier to achieving our mission."

To underscore the point, the governor's office recently released a written complaint from a visitor to the state's labor office to the Portland Press Herald.

"In this mural I observed a figure which closely resembles the former commissioner of labor," the visitor wrote, according to the newspaper. "In studying the mural I also observed that this mural is nothing but propaganda to further the agenda of the Union movement. I felt for a moment that I was in communist North Korea where they use these murals to brainwash the masses."

The letter writer identified himself as "A Secret Admirer," the newspaper reported.

Adrienne Bennett, press secretary for the governor, told CNN that talks about the mural started months ago and that it was decided that the artwork in the labor department lobby and the names of the conference rooms should not show favoritism to either labor or business.

"We understand the value of history and respect the artist -- we are now exploring options of where it can go. We want to find the appropriate place for it. We want to find a new home for it, " Bennett said. "There is no deadline for the removal."

Bennett said the Maine Arts Commission is helping find a new site for the mural.

Boyett said her agency will hold a naming contest for the conference rooms.

Berry called the decision to remove the mural "an insult to working men and women."

"The history of Maine is a history of hard-working people. The mural tells their story," Berry said. "And it's a story that deserves to be told and it deserves to have a place on the walls of the Department of Labor."