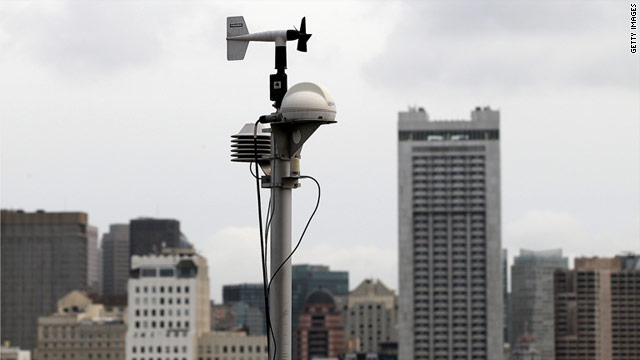 Since Japan's nuclear crisis, more RadNet radiation monitors like this one have been deployed in areas in the west coast.
STORY HIGHLIGHTS

(CNN) -- Colorado and Oregon have joined several other Western states in reporting trace amounts of radioactive particles that have likely drifted about 5,000 miles from a quake and tsunami-damaged nuclear power plant in Japan, officials say.

But, on a portion of its website dedicated to tracking such radiation, the Environmental Protection Agency noted Wednesday that these and other readings "show typical fluctuation in background radiation levels" and -- thus far -- "are far below levels of concern."

Sampling from a monitor in Colorado -- part of a national network of stations on the lookout for radioactivity -- detected miniscule amounts of iodine-131, a radioactive form of iodine, the state's public health and environmental department said Wednesday in a press release.

Kids swept away from Japanese school

Small amounts of radioactive material were detected Wednesday, too, in Hawaii -- just as they had a day earlier, according to the EPA. But while they were above the historical and background norm, the levels weren't considered harmful to human health.

Washington and California previously reported low levels of radioactive isotopes that likely came from Japan's Fukushima Daiichi nuclear power plant, which has been releasing radioactive particles into the air since its cooling and other systems were damaged by a 9.0-magnitude earthquake and massive tsunami on March 11. Efforts continued Thursday to cool down the spent nuclear fuel rods, prevent a further meltdown of the plant's six reactor cores and curb the release of additional radioactive material.

Sampling of these radioactive particles from these various monitors will be further analyzed at the EPA's national lab.

Still, right now, U.S. health officials have emphasized that, at about 5,000 miles from the plant, the West Coast is unlikely to see any dangerous levels of radiation regardless of what happens in Japan. Radioactive particles disperse in the air, thus there is less of a hazard the farther away you are.

"Our finding is consistent with findings in Washington and California. We have expected to find trace amounts of the isotopes released from the Japanese plant. There is no health risk," Gail Shibley, administrator of Oregon's Office of Environmental Public Health, Oregon Public Health Division, said in a statement.

Besides the Hawaii readings, the Environmental Protection Agency has found trace amounts of radioactive iodine, cesium and tellurium at four RadNet air monitor filters on the West Coast -- three in California and one in Washington. These levels are consistent with what a U.S. Department of Energy monitor found last week, the EPA said Monday.

Americans typically get exposure to radiation from natural sources such as the sun, bricks and rocks that are about 100,000 times higher than what has been detected in the United States.

There is no need for anyone as a precautionary measure to take potassium iodide, a medication that can counter the harmful effects of iodine-131, health officials say.